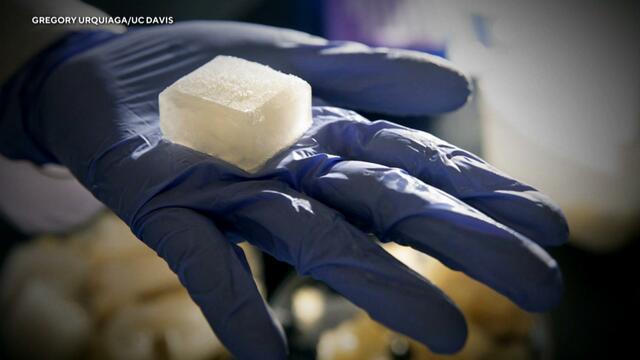 At University of California, Davis's Robert Mondavi Institute of Wine and Food Sciences, a team of researchers is re-imagining the ice cube.  "Jelly ice" stays just as cold for just as long as traditional ice with one key difference—it doesn't melt thanks to a gelatin membrane that traps water in its cube-like shape.  Once chilled, the cube can be manipulated into any form. Ph.D. candidate Jiahan Zou told Jonathan Vigliotti that the ice will revolutionize how food is kept cold while shipped.  "So here we have two pieces of salmon fillet on top of ice—traditional ice and jelly ice. Here they've been out for about an hour already. So, you can see ice already melted, and then all around, it's the meltwater. So the fish basically sinks in a pot of water right now," he said.   Cross-contamination and inadequate climate control across the supply chain are among the leading causes of food waste.  A 2009-2013 peer-reviewed study by Global Environmental Change found that nearly half of all seafood in the U.S. spoils before reaching the market.  Associate professor Luxin Wang came up with the idea for jelly ice after a visit to her fish market, when she realized there needed to be a better alternative to ice cubes and even ice packs. The jelly ice doesn't use plastic, it uses a protein, which is compostable.
Wang says jelly ice is 90% water, 100% biodegradable, and can be reused up to a dozen times.  "If you don't want to use them, you can compost them and throw them in your garden. Once you mix them with the potting soil, they actually support the growth of your plant," she said.  Wang and her team hope to eventually replace gelatin with easier to source agricultural by-products like proteins discarded by America's soybean industry.
The U.S. Department of Agriculture awarded her team a $485,000 grant for their research.
source: https://www.cbsnews.com/news/jelly-ice-cube-reusable/