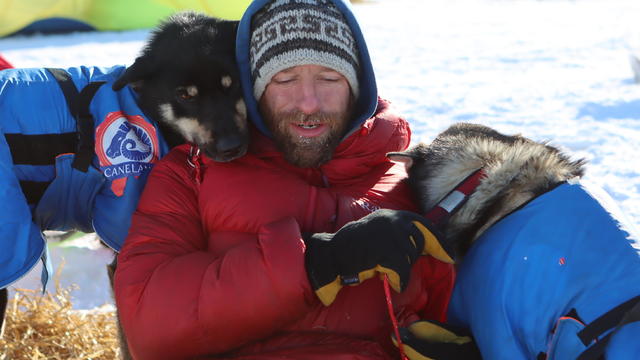 A pack of sled dogs belonging to an Iditarod veteran and reality TV star killed a family pet in Alaska, officials said. Authorities in Wasilla are investigating the March 30 incident involving dogs owned by musher Jessie Holmes, who finished third in year's Iditarod Trail Sled Dog Race and stars in "Life Below Zero: Alaska" on the National Geographic channel.
Holmes, who lives in rural Alaska, was staying with his dog team at a Wasilla hotel that backs up to the adjacent homeowner's yard. He let the dogs loose to relieve themselves when they attacked a pet dog named Lucky, who was attached to a lead in the yard.
When Lucky's owner, Liza McCafferty, came outside to retrieve the 8-year-old Havanese, she saw a black dog dart from under her deck. It was part of a pack that suddenly appeared in her yard, she told the Anchorage Daily News.
She said the pack looked like it might attack her too, so she retreated. Then Holmes came down the hill to retrieve his sled dogs before returning to the home.
"He came in and was very, very apologetic," McCafferty said. "He was on the verge of crying."
Lucky was taken to a veterinary clinic but was dead.
"It was just a really terrible accident due to my negligence," Holmes said.
Wasilla Mayor Glenda Ledford said in a statement there is video of the incident, which is under investigation.
"Video footage was obtained which showed multiple dogs emerging from an enclosed trailer nearby and running unrestrained in the area," she said in the statement.
Holmes said he has stayed at the hotel more than a dozen times and never had a problem letting his dogs loose to relieve themselves. He suspects two new dogs he had ventured off toward McCafferty's yard, and the rest of the pack followed.
"There's no way to not be distraught about this," Holmes said. He said he's fully accountable for this and wants to make things right.
Holmes said a Wasilla municipal official told him he would receive 10 loose dog citations and possibly another for animal cruelty, which could affect his mushing career.
In a Facebook post last week, McCafferty posted an image of her dog, Lucky, with a lengthy explanation of the incident.
"This tragedy was avoidable," she wrote.
source: https://www.cbsnews.com/news/jessie-holmes-sled-dogs-kill-family-pet-alaska/