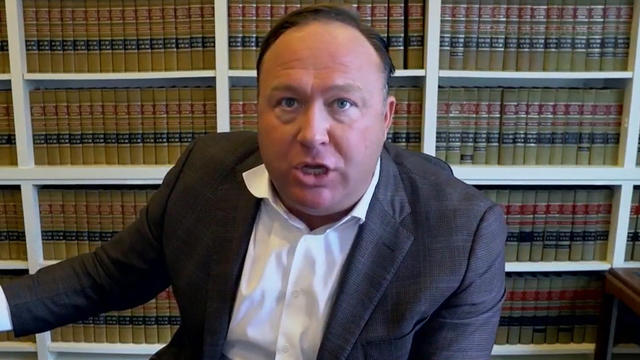 Hartford, Connecticut — Alex Jones was questioned Wednesday by lawyers for families of Sandy Hook victims in Connecticut, where a judge had ordered the Infowars host to face mounting fines until he appeared for a deposition.
Relatives of some of the 20 children and six educators killed in the 2012 Newtown, Connecticut, massacre sued Jones for defamation after he said the shooting never happened. A judge found Jones liable for damages and a trial on how much he should pay the families is set for August.
Jones, who lives in Texas, had defied a judge's order to appear for a deposition in the case, saying he was too ill. But Connecticut Judge Barbara Bellis said there wasn't enough evidence that Jones was too sick to attend and ordered him to come to Connecticut for questioning and pay escalating daily fines until he did so. Jones paid $25,000 in fines for Friday and $50,000 in fines for Monday, according to court records.
Jones said in a video on the Infowars website that the deposition began Tuesday and was to continue Wednesday. He said in the video that the families' lawyers began the deposition by "demonizing" him for his questioning official versions of events.
"It's just totally insane to sit there and watch this happen and to watch them lick their lips and lick their chops and think we're going to finally shut Alex Jones down," Jones said. "These people want to put us in prison for our speech."
Jones' lawyer, Norman Pattis, said tempers flared at times during the deposition on Tuesday, and much of the questioning was not related to the school shooting.
"I had the impression watching the attack on Mr. Jones that this trial will be about something far greater than what happened at Sandy Hook," Pattis said on the video. "The trial's going to be about ordinary people's ability to say I'm not buying it, I want to raise questions, I want to draw my own conclusions."
The families' lawyer, Christopher Mattei, said Jones has declared his "entire deposition confidential even while he and his attorney conduct media interviews discussing the details."
"Accordingly, we are unable to comment further at this time," Mattei said.
The deposition was held at the Bridgeport office of Koskoff, Koskoff & Bieder. After it ended Wednesday, Pattis filed a court document asking Bellis to return to Jones the $75,000 in fees he paid, which the judge said he could request only after sitting for questioning. Bellis did not immediately rule.
Jones missed the originally scheduled deposition in the case on March 23 and 24 in Austin, Texas. He cited a health issue including vertigo that his doctors initially thought was a serious heart problem but turned out to be a sinus infection.
The plaintiffs have said they have been subjected to harassment and death threats from Jones' followers because of the hoax conspiracy promoted on his website show. Jones has since conceded the shooting did happen.
source: https://www.cbsnews.com/news/alex-jones-questioning-sandy-hook-damages-lawsuit/