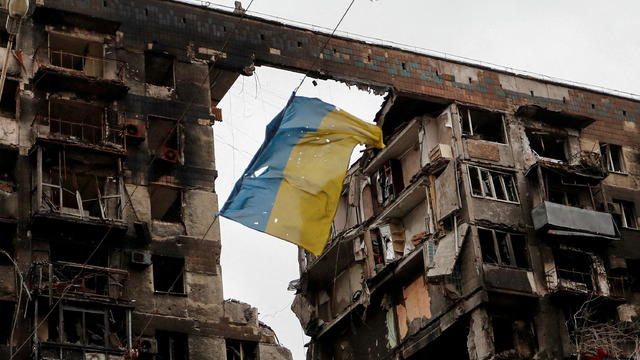 Two British soldiers fighting with the Ukrainian army have appeared on Russian state television after being captured in the besieged port city of Mariupol in southern Ukraine.
Several propaganda clips aired on Rossia 1 and RT channels on Sunday and Monday, picturing U.K. citizens Shaun Pinner, 48, and Aiden Aslin, 28. They fought in Mariupol as part of Ukraine's 36th Marine Brigade.
On Sunday, Pinner, who appeared to be tired and bruised, spoke to Russian TV war reporter Andrey Rudenko and gave some details about the battle of Mariupol.
"I was fighting in Mariupol for five to six weeks and now I'm in Donetsk People's Republic," Pinner said in English, referring to the eastern region where Russia and pro-Russian separatists have been fighting Ukraine for years. It is not clear how exactly he was captured or when the video was filmed.
Rudenko can be heard telling Pinner in Russia that his unit "had no chance" in Mariupol.
"The servicemen of the 36th brigade say their command specially sent them to be killed in order to make heroes out of them later," Rudenko says, without evidence. "You didn't have a single chance to reach this settlement Zachatovka, since Russian and DPR [Donetsk People's Republic] troops were everywhere."
Earlier in the video, Pinner described how he and his unit attempted to evacuate from the area.
"We were in the industrial zone of Mariupol, it was decided to leave, but I can't say exactly where. At four o'clock on Tuesday morning, we started moving," Pinner said. "It was dark, we took the wounded with us. Mortar and artillery attacks began, military aviation worked, panic began."
In another clip posted Monday, Pinner appealed to U.K. Prime Minister Boris Johnson to secure his and Aslin's release by swapping them with pro-Kremlin Ukrainian oligarch Viktor Medvedchuk.
Medvedchuk, a close personal friend of Russian President Vladimir Putin, was recently captured by Ukrainian special forces as he tried to flee the country towards Russia, Ukrainian officials said.
Pinner's plea was aired a few minutes after the Ukrainian security service released a video of Medvedchuk pleading to swap him with "defenders and residents of Mariupol."
In another Russian propaganda video over the weekend, Aslin was shown handcuffed and with cuts and bruises on his face, perpetuating Russian state TV talking points about alleged "Nazi atrocities" in Ukraine, which is how Moscow justified its invasion.
Aslin is a former care worker who joined the Ukrainian marines in 2018 and previously fought for the Syrian Kurdish YPG against the Islamic State throughout 2015, The Guardian reported.
Russian state TV claimed that they both were "British mercenaries" who surrendered in Mariupol. Pinner's family refuted this claim, saying that the former British soldier moved to Ukraine four years ago and joined the Ukrainian army.
"Shaun enjoyed the Ukrainian way of life and considered Ukraine as his adopted country over the last four years. During this time, he met his Ukrainian wife who is very focused on the humanitarian needs of the country," the family told the BBC.
In a late February interview, Pinner himself told the Daily Mail that he previously served in the Royal Anglian Regiment and now fought with the Ukrainian army as a "contract soldier."
Speaking from outside Mariupol, he said: "I am here defending my family and adopted city. Russia started this war — it's funded by Russia and driven by Russia. But we will fight them; make no mistake about that."
Aslin's relatives also told The Guardian that Ukraine was "his adopted country," and he is engaged to a Ukrainian woman.
The families said in a statement they are working with the U.K. Foreign Office to "ensure their rights as prisoners of war are upheld according to the Geneva Convention," which calls for humane treatment of people captured during hostilities.
The Foreign Office also called on the Kremlin to treat the U.K. citizens humanely and condemned "the exploitation of prisoners of war for political purposes."
The battered port city of Mariupol appears to be on the brink of falling to Russian forces after weeks under siege, which could give Moscow a crucial military success following a failed attempt to seize the capital and the loss of its flagship Black Sea cruiser Moskva.
Capturing Mariupol, which appears to have been practically razed to the ground, would give Russians control over significant territory in the south and could potentially free up forces to double down on the attack in other areas in Ukraine's east.
source: https://www.cbsnews.com/news/ukraine-russia-uk-soldiers-captured-mariupol-shaun-pinner-aiden-aslin/