Entertainment companies explore how to use the "magical" metaverse 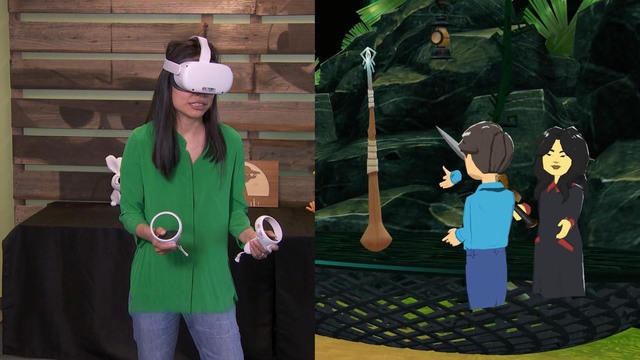 From "Tron" to "The Matrix" to "Ready Player One" — The virtual world is becoming a reality.
Filmmaker Maureen Fan is one the entertainment visionaries upgrading traditional 2-D movies to an entirely new experience.  Her studio created a virtual set for the award-winning animated, interactive film "Baba Yaga," starring Glenn Close and Kate Winslet.
She told CBS News that soon people will be able to inhabit the "universes" of mainstream movies like "Star Wars" and "Lord of the Rings."
"I mean how cool would it be to be able to be in a universe that you love. One that you could never actually go to in your world, except in your imagination? But here you can actually build it," she told CBS News' Carter Evans.
So far Fan's studio has created eight animated films, each more complex and interactive than the previous one – pushing the boundaries of our imagination.
"I don't think the metaverse ever replaces real life. But I think it's just a different way to experience it. Things that you wouldn't be able to do in real life are things that you could only do in the metaverse," she said. "That's really exciting. It's a world that someone else creates that you could have never imagined, that's one I think is very magical."
From sports events to concerts, gaming and beyond, Americans could soon be spending a lot of time in the metaverse.
Facebook, Microsoft and other companies are investing billions in what may become a single 3-D virtual world, or maybe several worlds, connected.
Silicon Valley insiders believe it's likely to upend the way people live their lives.
"We should think of the metaverse as the next iteration of the internet," author Matthew Ball said.
Ball wrote "The Metaverse And How It Will Revolutionize Everything." With seven of the richest companies investing billions into the metaverse, Ball believes it could be worth trillions in a few years.
"Most estimates for the overall value of the metaverse suggest that it's going to be roughly 6 to 10 trillion (dollars) by 2032," he said.
Allan Cook is creating a studio to test ideas for the future of entertainment in the metaverse. He works for Deloitte, a company traditionally more familiar with spreadsheets than interactive entertainment.
"I think that the way we consume content has been kind of the same for the last hundred years. As we move forward, it'll be in 3D and that'll be the first time we truly will be able to experience things in an immersive way," Cook said.
source: https://www.cbsnews.com/news/entertainment-companies-metaverse-blur-reality/