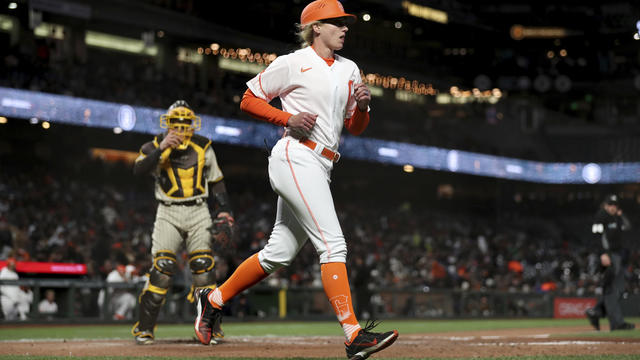 It was a first at first base Tuesday night for San Francisco Giants coach Alyssa Nakken, who became the only woman in Major League Baseball history to coach on-field during a regular season game.
Nakken, 31, took over first-base coaching duties at San Francisco's Oracle Park after Antoan Richardson was ejected in the third inning, apparently while instructing the defense, according to CBS Sports.
Taking over as tonight’s first base coach:
Alyssa Nakken 🧡🤍 pic.twitter.com/YN7vpYnu7q
The Giants were facing the San Diego Padres, whose first baseman, Eric Hosmer, shook an emotional Nakken's hand - and the crowd gave an ovation - to commemorate the historic moment.
She also got a hug from Giants catcher Curt Casali when she returned to the dugout at the bottom of the inning, MLB reported.
The Giants wound up trouncing the Padres 13-2, bringing their season record to 3-2. The Padres sit at 4-2. Both teams play in the National League West division.
Nakken started as an intern with the Giants organization in 2014, CBS Sports reported, and in 2020 became the league's first woman to hold a full-time coaching position.
"I feel it's my job to honor those who have helped me get to where I am," she told MLB.com after getting the position. "I'm excited that now girls can see there is a job on the field in baseball. It's really cool."
Nakken's historic night came days after Rachel Balkovec made her debut as the first female manager of an MLB-affiliated team, the New York Yankees' Single-A Tampa Tarpons.
source: https://www.cbsnews.com/news/alyssa-nakken-san-francisco-giants-mlb-history-first-woman-on-field-coach/