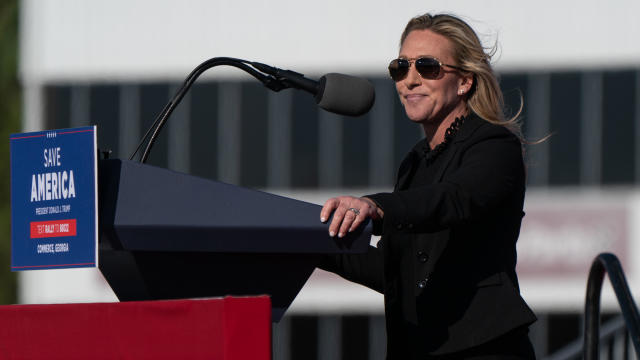 Rep. Marjorie Taylor Greene is testifying in court Friday in an administrative hearing on a challenge seeking to block her from the ballot in Georgia based on a post-Civil War era policy about keeping insurrectionists from office.
Ron Fein, the attorney for the group of challengers, Free Speech for the People, said Friday that the "most powerful witness against Marjorie Taylor Greene's candidacy, in establishing she crossed a line, is Greene herself."
Greene's lawyer, James Bopp Jr., said the candidacy challenge "cannot be decided by this court" and suggested that the U.S. House of Representatives should have a role to debate whether she should be disqualified or prevented from being seated as a member of Congress in 2023, after the midterm election.
Bopp called the January 6 attack on the U.S. Capitol "despicable" but said none of the hundreds of people convicted so far in the assault were specifically charged for insurrection. He did say Greene met with former President Trump on January 3 "about making objections to certain states — based on evidence she believed constituted sufficient voter fraud."
A federal judge on Monday allowed the effort to disqualify Greene from running for reelection over her role in the January 6 assault on the U.S. Capitol to proceed.
The challenge to Greene's candidacy was mounted by a group of five voters from her congressional district who argued she is ineligible to run for federal office under a provision of the 14th Amendment that was ratified after the Civil War and meant to keep former Confederate officers and officials from holding public office again.
Aaron Navarro is an associate producer for the political unit at CBS News, focusing on House and gubernatorial campaigns as well as the census and redistricting.
source: https://www.cbsnews.com/news/watch-live-marjorie-taylor-greene-testifies-against-challenge-to-her-candidacy/