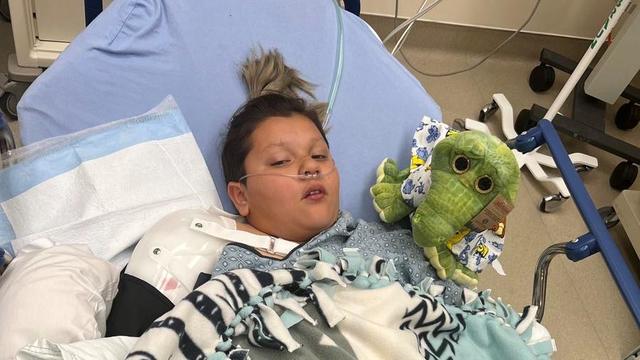 A Southern California shoe store owner opened fire at two shoplifters, police said, but mistakenly shot a 9-year-old girl about to get her picture with a mall Easter bunny. The store owner fled the state and was arrested in Nevada, authorities said Wednesday.
This is the 9 yr old girl, injured yesterday when a store owner chasing alleged shoplifters opened fire inside a Victorville mall. That store owner is now facing attempted murder charges. @CBSLA pic.twitter.com/ZtcjLUmWRK
Marqel Cockrell, 20, was chasing the shoplifters out of the store Tuesday evening at the Mall of Victor Valley in the small city of Victorville when he "fired multiple shots at the shoplifters," Victorville police said in a statement.
"Cockrell's shots missed the shoplifters and instead hit the 9-year-old female victim," the statement said.
The girl, identified by family members as Ava Chruniak, had been getting ready for pictures with the Easter bunny in the mall when the shots were fired, said her grandmother, Robin Moraga-Saldarelli. The girl was left with three gunshot wounds, including two in her arm, Moraga-Saldarelli said.
One bullet fractured a bone.
"And it's the kind of fracture they can't surgically fix. She's going to have to wear a special brace for it, and it's going to take a lot longer to heal," she told Fox 11 TV in Los Angeles.
"It'll be awhile before the bone heals and then we will see the extent of the nerve damage, but she's a trooper. She really is a tough little kid," Moraga-Saldarelli told KNBC-TV.
It's the third shooting to occur at the mall in just the last six months, CBS Los Angeles reported.
Deputies responding to the reports of gunfire found Ava wounded at about 6:30 p.m., the San Bernardino County Sheriff's Department said.
She was airlifted to a hospital in stable condition, officials said. The mall's stores were locked down and customers sheltered inside as deputies searched for the shooter.
CBS reporters spoke with one of the storeowners who sheltered the victim's family moments after the shooting took place.
"We heard some gun shots like around 6:30 in the afternoon, so me and my coworker went to the front of the store to close the doors," said Jose Carlon, the owner of Stacy's a menswear store adjacent to the Easter bunny photo opportunity.
Cockrell, a co-owner of the shoe store Sole Addicts, was arrested in his car at about 9 p.m. in Clark County by the Nevada High Patrol, Victorville police said.
He was being held Wednesday for lack of $1 million bail at the Clark County Detention Center "on an extraditable warrant, for attempted murder," Victorville police said. An extradition hearing was scheduled for Thursday and jail and court records did not indicate whether Cockrell had an attorney representing him who could comment on his behalf.
"I'm glad they caught him and he will definitely pay for this. I really hope they throw the book at him," Moraga-Saldarelli told KNBC-TV.
The mall was closed Tuesday after the shooting and reopened on Wednesday.
Shopper Terry Lattimore told CBS Los Angeles she has lived in the area for a long time and has never seen as many problems as she sees now.
"It never used to be like this. We've been here for 10 years, never had a problem, and I heard, I think, a couple of weeks ago,  something happened in there, to turn around last night, this happens," she said. "It's horrible. My heart goes out to the little kid."
Another shopper, Vladimir Ramirez, told the station that more security was needed.
"It's scary because we see this more often here, a lot of shootings around," Ramirez said.
source: https://www.cbsnews.com/news/marqel-cockrell-arrested-shoots-at-shoplifters-hits-girl-with-easter-bunny-mall-of-victor-valley/