Greene testifies against challenge to her congressional candidacy 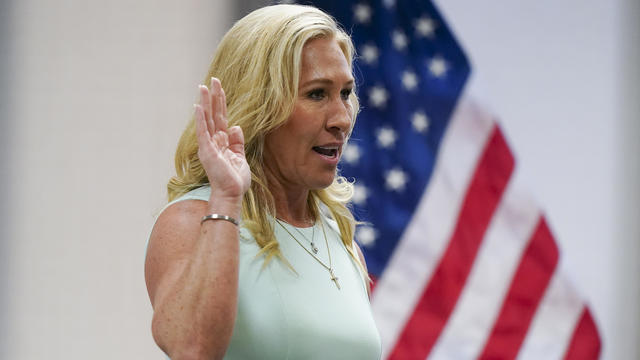 Rep. Marjorie Taylor Greene, of Georgia, defended her right to run for Congress in court Friday in an administrative hearing on a challenge by a group of voters seeking to block her from the ballot based on a post-Civil War era policy about keeping insurrectionists from elected office.
The voters' attorney, Andrew Celli, focused much of his questioning around 1776, on comparisons Greene made between the Jan. 6, 2021, assault on the U.S. Capitol and the Revolutionary War and the use of the Second Amendment by citizens to rise up against tyrannical governments.
During her testimony, Celli pointed to video interviews in which she had said Jan. 6, 2021 would be "our 1776." Greene rebuffed most of Celli's points, either by criticizing the way the videos were edited or for airing on CNN, which she claimed was unreliable. Asked about the Proud Boys' plans for a Jan. 6, "1776 Returns," Greene denied any knowledge of it. She repeatedly stated that her main goal was to object to the results of the Electoral College.
Greene was also asked whether she recalled urging President Trump to impose martial law as a way to remain in power. She said she did not remember. She was also asked if she had provided any information to demonstrators or organizers on Jan. 6, such as a map of the capitol. She said she did not. "I had gotten the keys on January 3," she said. "I couldn't even find where the bathroom was most of the time."
Celli also asked if she knew of certain groups planning demonstrations on Jan. 6, 2021, Greene responded, "I don't recall." Greene also repeatedly said she didn't remember if she talked to other members of Congress or anyone in the White House about protests planned for that day. She was also asked about tweets on her account, including one featuring an Epoch Times article quoting Trump saying supporters should join the "wild" protest in Washington, D.C., on Jan. 6. She said she was just looking to share details about the march.
Ron Fein, the attorney for the group of challengers, Free Speech for the People, said Friday that the "most powerful witness against Marjorie Taylor Greene's candidacy, in establishing she crossed a line, is Greene herself."
Greene's lawyer, James Bopp Jr., said the candidacy challenge "cannot be decided by this court" and suggested that the U.S. House of Representatives should have a role to debate whether she should be disqualified or prevented from being seated as a member of Congress in 2023, after the midterm election.
Bopp called the Jan. 6 attack on the U.S. Capitol "despicable" but said none of the hundreds of people convicted so far in the assault were specifically charged with insurrection. He did say Greene met with former President Trump on Jan. 3 "about making objections to certain states — based on evidence she believed constituted sufficient voter fraud."
The challenge to Greene's candidacy was mounted by a group of five voters from her congressional district who argued she is ineligible to run for federal office under a provision of the 14th Amendment that was ratified after the Civil War and meant to keep former Confederate officers and officials from holding public office again. Section 3 of the amendment states that "no person shall be a senator or representative in Congress" or "hold any office, civil or military" if they, after having taken an oath to support the Constitution, "engaged in insurrection or rebellion against the same, or given aid or comfort to the enemies thereof."
In his closing, Bopp pointed to amnesty acts from 1872 and 1898 that he argued undercut the post-Civil War law that is at the crux of the challenge against Greene. He challenged the connection the plaintiffs were looking to paint between Greene and the rioting and downplayed the rally that preceded the attacks. There are constantly rallies on the ellipse, Bopp told the court.
"This a political agenda and this has been a political show trial," Bopp said.
Celli argued that Greene's actions from Jan. 3 - 6, when she is a sworn member of Congress, show she took a role in engaging in and encouraging the insurrection. He referred to video interviews, especially the one in which Greene said Trump supporters could not "allow power to transfer peacefully like Joe Biden wants."
Celli said Greene is "one of several leaders who gathered the kindling. She treated the conditions, made it possible for there to be an explosion of violence. Then she dropped the match. Now, she comes in and is surprised and appalled that a fire occurred."
"Don't buy that, your honor," Celli said in closing.
The administrative judge in Greene's case, Charles Beaudrot, said he will try to make a decision within about a week or so. Then, he will make a recommendation to Georgia Secretary of State Brad Raffensperger about Greene's candidacy, and it will be up to him to decide whether to remove her from the ballot. Raffensperger is also up this year for reelection.
A federal judge on Monday allowed the effort to disqualify Greene from running for reelection over her role in the January 6 assault on the U.S. Capitol to proceed.
Aaron Navarro is an associate producer for the political unit at CBS News, focusing on House and gubernatorial campaigns as well as the census and redistricting.
source: https://www.cbsnews.com/news/marjorie-taylor-greene-trump-martial-law-testimony/