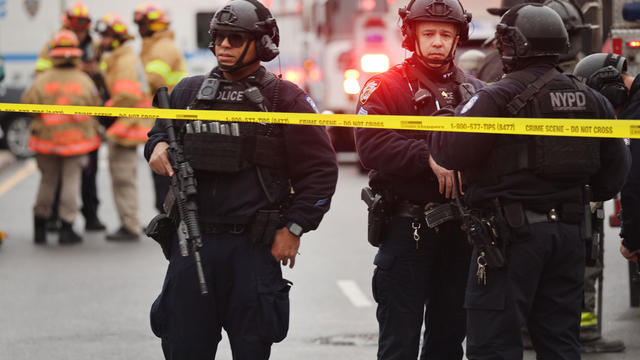 New York City police are searching for a man who is suspected of unleashing a smoke canister into a crowded subway car in Brooklyn and then opening fire Tuesday morning, leaving more than a dozen people wounded.
The suspect is described as a Black male, who is approximately 5 feet 5 inches tall and heavyset. New York City Police Commissioner Keechant Sewell said at a press conference that the suspect was wearing a green construction vest and a gray sweatshirt.
Sewell said that at around 8:24 a.m., the man, who was riding the train, "donned what appeared to be a gas mask" before taking out a canister and opening it, releasing smoke into subway car. He then started shooting.
Police said the gunman, who has not been identified, remains at large. Federal agencies are assisting in the investigation.
At the press conference, New York Governor Kathy Hochul described the manhunt for the suspect as an "active shooter situation."
"This individual is still on the loose. This individual is dangerous," Hochul said.
Sewell said the attack is not being investigated as an act of terrorism at this time, but officials also said nothing was being ruled out as the investigation continues.
In a video statement, New York City Mayor Eric Adams said no "live explosive devices" were found. "But the suspect in today's attack detonated smoke bombs to cause havoc," said Adams, who is isolating after being diagnosed with COVID-19.
An official said at the press conference that local hospitals were treating a total of 16 patients, 10 of whom suffered gunshot wounds. Five were reported to be in critical but stable condition. Other injuries were related to smoke inhalation, possible shrapnel and the panic of the situation.
Videos show smoke billowing from the train as its doors opened at the next stop, with riders, many apparently injured, fleeing.
While some bystanders awaiting the train also fled, others stayed behind to aid injured straphangers.
Graham Kates is an investigative reporter covering criminal justice, privacy issues and information security for CBS News Digital. Contact Graham at [email protected] or [email protected]
source: https://www.cbsnews.com/news/new-york-city-subway-shooting-suspect/