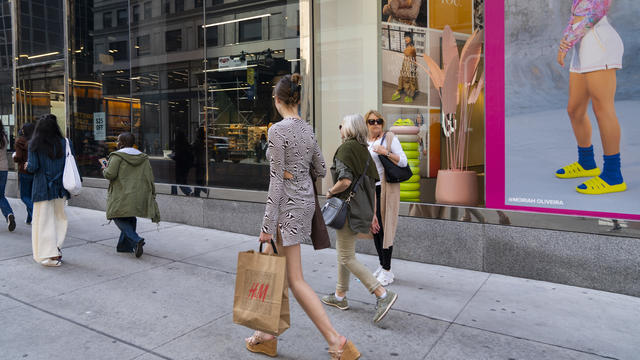 Americans kept spending in March even amid higher prices for food, gasoline and other basics, worsened by Russia's escalating war with Ukraine.
Retail sales increased 0.5% after registering a revised 0.8% jump from January to February. Spending has been fueled by wage gains, solid hiring and more money in banking accounts. January's increase of 4.9% was the biggest jump in spending since March 2021, when American households received a final federal stimulus check of $1,400.
The Commerce Department reported Thursday that general merchandise stores saw business up 5.4%, while sales at clothing stores rose 2.6%. Restaurant sales rose 1%. Motor vehicle sales were down 1.9%, and volatile non-store retail sales, or online sales, fell sharply at 6.4%.
Retailers are closely monitoring Russia's war with Ukraine to see if it will erode shoppers' confidence and worsen inflation. The conflict has already limited supplies of wheat, vegetable oils and electronic components like chips. It has also pushed up fertilizer prices that were already high, made scarce supplies even harder to find and squeezed farmers, especially those in the developing world. In addition to the Russian invasion, rising COVID-19 cases and renewed restrictions in China could worsen supply-chain issues.
"Overall consumption is likely to have received a boost last month from a further solid rise in services consumption," said Andrew Hunter, senior U.S. economist at Capital Economics, in a research note.
"While that would still leave growth over the first-quarter as a whole at close to 3.5% annualized, it provides a weak starting point for the second quarter," he added.
source: https://www.cbsnews.com/news/retail-sales-supply-chain/