Laser strikes on aircraft, potentially blinding pilots, are on the rise 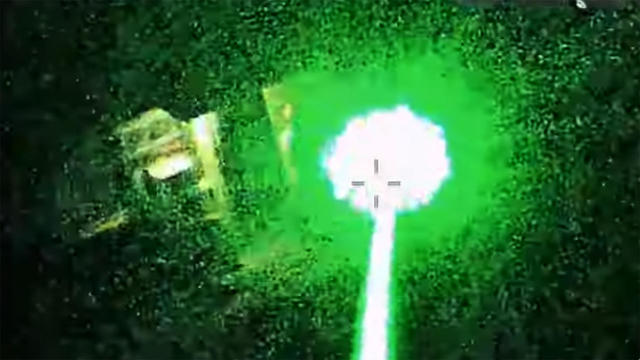 New numbers from the Federal Aviation Administration show incidents of people hitting aircraft with lasers, potentially blinding pilots, are on pace for a new record.
The number of reported laser strikes jumped by 41 percent last year, to more than 9,700; that's more than one an hour, with California, Texas and Florida leading the nation in incidents.
The rise prompted an FAA alert, and a plea for people to stop aiming handheld laser pointers at airplanes. Pilots tell CBS News correspondent Kris Van Cleave it literally can be a matter of life and death.
Forty-seven pilots reported injures from the strikes last year. The lasers can cause temporary blindness, and in some cases lasting eye injuries – and they often occur just as pilots are about to land.
In February, in Palmetto, Florida, Manatee County Sheriff's Office Watch One helicopter was flying low when it got lit up by a blinding bright green laser, aimed at the crew from the ground.
Deputy Ben Sehorne was at the controls. "All you see is green," he said. "So, it's very disorienting.
"It's almost like a disco ball. Once the laser itself hits the cockpit, it bounces everywhere, and it's very blinding."
In Seattle, the FBI is now offering a $10,000 reward after a dramatic increase in laser incidents. Pilots reported more than 100 strikes since January, with 28 occurring in just three days while the airliners were taking off or landing.
It happened to Captain Laura Einsetler as she was landing at LAX: "We absolutely have to be able to see to land the aircraft," she said. "I was flying as the captain. The first officer exclaimed 'Ugh!' and said, 'Laser!' as the entire cockpit had lit up bright green."
FAA data suggests the number of reported laser strikes in 2022 is on track to surpass last year's all-time high. During the first quarter of this year, the FAA received 2,275 reported laser strikes, up from 1,944 in 2021.
The FAA thinks part of the reason these strikes are surging the way they are is that laser pointers are powerful and cheap. "CBS Mornings" ordered one online for about $20.
Pilots are trained to look away from the lasers if they see a strike coming. And last year, Washington State Patrol pilots were first in the nation to test new protective glasses developed by the Air Force Research Lab, aimed at filtering out the laser light to reduce the impact of these strikes.
While the number of incidents continues to climb, arrests are rare. But Watch One was able to hone in on the guy with the laser, directing officers to a 17-year-old, who is now facing felony charges, and the potential of thousands in fines from the FAA.
"It's not worth it – you're going to have a bad day if you get caught," said Deputy Sehorne.
A warning from police, that a beam of light could have you headed to jail in a flash.
source: https://www.cbsnews.com/news/laser-strikes-airplanes-on-the-rise-faa/