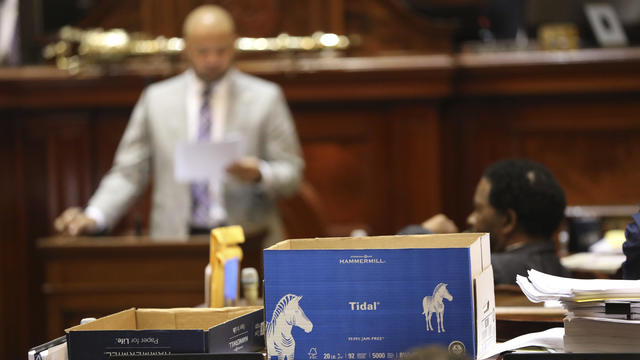 South Carolina's Republican House majority outlasted more than 1,000 amendments by Democrats on Tuesday and passed a bill that would bar transgender students from playing girls' or women's sports in public schools in colleges.
The delaying tactic by Democrats was largely symbolic but it still held off a vote for hours before the bill passed 82-28 on Tuesday evening. The bill was just one routine step away from heading to the South Carolina Senate for its consideration. That chamber is dominated by Republicans too.
If ultimately passed and signed into law, the bill would have South Carolina join a number of other conservative states in requiring transgender students to compete with the gender listed on their birth certificates.
Between the four large boxes of amendments and a tornado warning that evacuated the chamber, debate dragged on for nearly eight hours. But the Republican House majority passed the bill about 9:15 p.m. Tuesday.
About a dozen states have already passed similar legislation, and transgender athletes have become an issue in midterm campaigns in such states as Pennsylvania. But Republicans aren't in lockstep, with GOP governors in Indiana and Utah vetoing bans in their states.
Republican Speaker Jay Lucas tossed out nearly 600 amendment proposals on Tuesday, saying they were almost the same with only small changes like altering names of schools in each proposal.
After those rulings, Democrats pulled down even more, with the writer of most of the changes saying bringing the House to a halt for several hours was a victory.
"Today we saw so many of my colleague stand up for people who do not often have a voice," said Rep. John King, a Democrat from Rock Hill.
Supporters of the bill mostly stayed quiet Tuesday to not prolong the debate. One amendment did pass that would create girls' wrestling teams in high schools.
Bill sponsor Rep. Ashley Trantham did take the podium just before the vote, thanking the people who have fought for two years to get the bill passed in South Carolina. It failed in a House committee in 2021.
"It is because of your actions that South Carolina is one step closer to saving women's sports," the Republican from Pelzer said.
The South Carolina High School League said it takes up what teams a transgender athlete can play for on a case-by-case basis and has heard fewer than five requests. Elected Republican Education Superintendent Molly Spearman is also against the proposal.
Democrats said Republicans should be ashamed for singling out people that much of society already treats badly.
"Leave these transgender kids alone. There are less than 1% of them," said Rep. Krystle Matthews a Democrat from Ladson.
Before Tuesday's debate started, Democrats filed four boxes full of amendments— an estimated 1,000 in all — to change the bill. Republicans immediately invoked a rule limiting debate to just three minutes per amendment. If Democratic members had been able to keep taking their full time and kept asking for two-minute long votes, the debate could have stretched into the weekend.
Some amendments by Democrats would make substantial changes to the bill like allowing a public high school to opt out of the requirements or requiring women's sports to have the same number of assistant coaches or amenities as men's teams.
Others would do things like rename the proposal the "Discrimination Capital of the United States Act" or name individual schools or allow school bands to only play at women's sporting events.
Debate was also delayed for nearly an hour after the House chamber was evacuated for a tornado warning for Columbia.
A similar bill has made it to the Senate floor but hasn't been debated. The showdown happened as the bill faced a deadline this week to pass at least one chamber or it would need a two-thirds vote to be considered.
At least a dozen of the House's 43 Democrats took turns speaking on the amendments. Lucas abruptly interrupted them when their time was up.
Rep. Annie McDaniel was talking about statistics about mental health problems and suicide rates among transgender youth when Lucas unceremoniously told her ""Ms. McDaniel, your time on the amendment has expired."
"All right," the Democrat from Winnsboro said. "I'll be back to finish telling you about this."
source: https://www.cbsnews.com/news/south-carolina-transgender-sports-ban-passes-house/