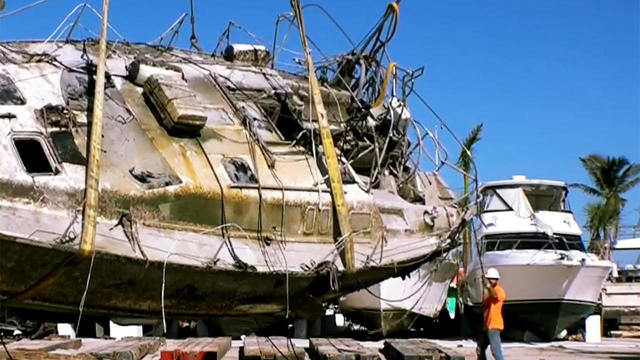 It's been nearly four months since Hurricane Ian made landfall on Florida's coast, leaving a terrible path of destruction in its wake. And the cleanup is nowhere near over.
According to Florida's Fish & Wildlife Conservation Commission, there are more than 700 derelict boats in the area, but only two-thirds have been removed.
"It's still astounding how many vessels are completely displaced – in the mangroves, just pushed up in places they shouldn't be, on people's yards," said Staci Stevens, who runs Monroe Canal Marina in St. James City, Florida. Since Ian came onshore in late September, business at her marina has gone from recreational to recovery.
"It was heartbreaking to see, like, 15 years of building up a business to be wiped out in essentially, I'd say, even 24 hours," Stevens told CBS News. "One day it was good, and then the next day it was completely gone."
The only charter boat fishing being done nowadays is by cranes fishing badly-damaged boats out of the water.
Many end up at Stevens' marina, which has now become a boat emergency room, where they're stacked, catalogued and inspected by insurance companies.
This new line of work has allowed her to remain open and keep her employees working.
One giant sailboat, just lifted onshore, was loaded onto a flatbed, which will carefully move the hull to a nearby field, in what used to be Stevens' palm tree nursery, now turned into a makeshift boat graveyard. There, rows upon rows of more than 200 vessels, and some mini-yachts, await their fate.
As the cleanup continues in southwest Florida after the storm, Rob Mang found his neighbor's 65-foot-boat, Taboo, where it shouldn't be: lodged in his backyard, after the storm ripped it off the dock.
"It was a complete and total shock," he said. "It looked bigger than we'd ever thought the boat looked, because now it's halfway on land, and halfway in our backyard."
And it'll be there a few more weeks; there's a long waiting list for boat towing services on Florida's Gulf Coast.
As for Taboo's owner, Jim Beyer, the price to pull out and fix the damaged boat is too much, so an insurance company will come and tow Taboo.
"I contacted them, and they said to lift that off there with a huge barge and a crane was gonna be $16,200, [just to] lift it up, and put in the water," Beyer said.
Andres Rosado has spent more than two months cleaning up Ian's mess, towing damaged boats left on the water (and underwater) to land.
"I really hope to be busy, maybe few more months," Rosado said. "It's hard to say how long we're gonna be doing this. I hope it's as much time that we have to clean this whole environment."
But like many in this part of Florida, Rosado just wants to get back to when being on the water wasn't work.
"I do wanna be back to what's the normal, and that was boaters going, enjoying restaurants, enjoying the beach, enjoying Southwest Florida," Rosado said.
Omar Villafranca is a CBS News correspondent based in Dallas.
source: https://www.cbsnews.com/news/hurricane-ian-florida-gulf-coast-boats-left-derelict/