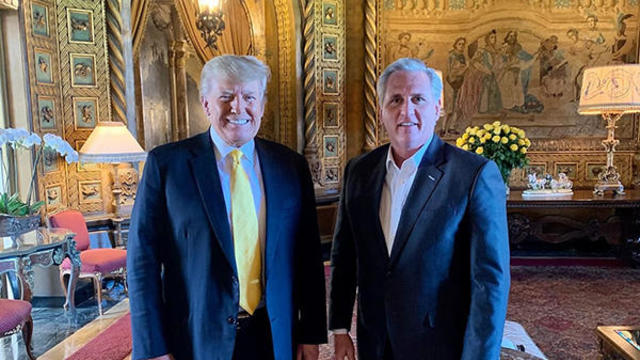 An audio recording released Thursday confirmed that House Minority Leader Kevin McCarthy told his fellow Republican leaders he was "seriously thinking" about recommending that former President Trump resign in the wake of the January 6 attack on the Capitol. The recording, which was taken during a House Republican leadership meeting last year, was released just hours after McCarthy denied the episode in a statement.
In the January 10 meeting, Wyoming Rep. Liz Cheney — who was the chairwoman of the Republican conference at the time — asks McCarthy if there's any chance Trump would resign.
"My gut tells me no. I'm seriously thinking about having that conversation with him tonight. I haven't talked to him in a couple of days," McCarthy says.
The audio was published by New York Times reporters Jonathan Martin and Alex Burns, who detailed an account of the meeting in a story published on Thursday and adapted from their book, "This Will Not Pass."
In the recording, McCarthy goes on to tell his leadership team that the impeachment resolution being crafted by Democrats would pass the House, and that he believes it might pass the Senate too.
"The only discussion I would have with him is that I think this will pass, and it would be my recommendation you should resign," McCarthy says. "That would be my take, but I don't think he would take it, but I don't know."
He also mentions he has a "personal fear" of getting into any conversations about "Pence pardoning," and acknowledges he had discussions about the 25th Amendment, which dictates how the president could be removed from office.
According to the Times story — but not featured in the audio released Thursday night — McCarthy told other Republican leaders, "I've had it with this guy." He also told other House Republican colleagues that Trump's behavior the day of the attack was "atrocious and totally wrong." He blamed Trump for the riots at the Capitol, and, with an impeachment resolution on the horizon from Democrats, he planned to tell the former president to resign.
"What he did is unacceptable. Nobody can defend that and nobody should defend it," he said, according to the Times.
In a statement after the Times story was published Thursday, McCarthy called the reporting "totally false and wrong."
"It comes as no surprise that the corporate media is obsessed with doing everything it can to further a liberal agenda," he wrote. "This promotional book tour is no different. If the reporters were interested in truth why would they ask for comment after the book was printed?"
He went on to accuse the "corporate media" of trying to profit off of "manufactured political intrigue from politically-motivated sources."
McCarthy's office did not return a request for comment late Thursday evening.
Some of McCarthy's frustrations with the president did play out publicly. On January 13, he gave a speech on the House floor in which he said "the president bears responsibility for Wednesday's attack on Congress by mob rioters. He should have immediately denounced the mob when he saw what was unfolding."
But later that month, he sought to repair his relationship with the former president, who still held enormous sway over the GOP base. He visited Trump's Mar-a-Lago home and posed for pictures with him.
Shortly after the audio was released Thursday evening, Illinois Republican Adam Kinzinger said the Minority Leader should be "ashamed."
"Question for Kevin McCarthy, @GOPLeader…how can you honestly feel ok with the lies?" Kinzinger tweeted.
The Times also reported Senate Minority Leader Mitch McConnell told his advisers after the Capitol attack, "If this isn't impeachable, I don't know what is," in reference to the upcoming impeachment vote. He also predicted there would be a strong bipartisan vote to convict in the Senate. Ultimately, just seven Senate Republicans voted to convict Trump during his impeachment trial, while others who criticized his behavior – including McConnell – argued that it was unconstitutional to impeach a former president.
A McConnell spokesman did not return a request for comment.
Jack Turman and Nikole Killion contributed to this story
Rebecca Kaplan covers Congress for CBS News.
source: https://www.cbsnews.com/news/mccarthy-wanted-trump-resign-january-6-recordings-show/