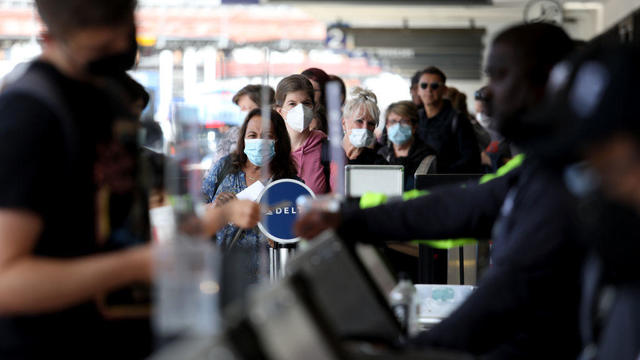 Passengers who were banned by airlines for failing to comply with the national mask mandate could soon be able to fly again. United, Delta and Alaska Airlines told CBS News they will review each case before making a decision.
Delta Airlines said that it will restore certain banned passengers' flight privileges after they demonstrate "an understanding of their expected behavior when flying." Passengers who exhibited "egregious behavior" and were already on the permanent no-fly list will remain banned.
"At Delta, nothing is more important than the safety and security of our customers and our people," the airline said in a statement. "Any further disregard for the policies that keep us all safe will result in placement on Delta's permanent no-fly list."
Delta banned about 2,000 passengers while the mask mandate was in place.
United banned around 1,000 customers while the mask policy was in effect. Like Delta, the airline said that passengers would be removed from the no-fly list on a "case by case basis." Alaska Airlines told CBS News that over 1,700 passengers were banned for refusing to wear masks.
The airlines' decisions come after Tampa U.S. District Judge Kathryn Kimball Mizelle voided the CDC's requirement covering airplanes and other public transit, and the Transportation Security Administration said it would no longer enforce the mandate. At least eight major airlines, including Delta, JetBlue, American, Frontier and Spirit, no longer require passengers to wear masks throughout the duration of their flights.
But on Wednesday, the Justice Department appealed Mizelle's ruling after the CDC said that masking while in transportation corridors like planes and trains is "necessary for the public health."
source: https://www.cbsnews.com/news/mask-mandate-airlines-no-fly-list-banned-passengers/