The Neptune: The missiles that struck Russia's flagship, the Moskva 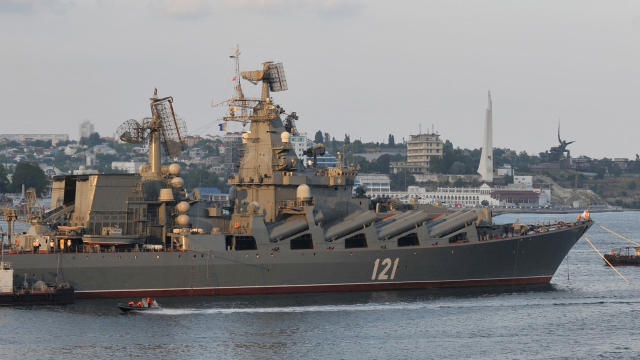 When the flagship of Russia's Black Sea fleet, the Moskva, was badly damaged earlier this week, Ukraine immediately claimed that it had struck it with two missiles, and Russia denied it, instead blaming the damage on a fire where ammunition on the ship was stored. While the Moskva was being towed to port, it sank, after it became unstable in stormy conditions because of the damage to the hull, the Russian Defense Ministry told the Russian state news service Tass.
On Friday, a senior U.S. defense official confirmed that the Russian cruiser had been struck by two Neptune anti-ship missiles fired by the Ukrainians from land-based launchers. The Ukrainian-made Neptunes may also be launched from ship or air.
The U.S. military's worldwide equipment guide describes the Neptune as an anti-ship cruise missile with a maximum firing range of 280 kilometers, or about 174 miles. The Russian ship, about 600 feet long, was about 60 kilometers or about 37 miles south of Odesa, which is well within the range of the Neptune, a separate defense official said.
According to the second official, the ship generally has almost 500 sailors onboard. Pentagon press secretary John Kirby told CNN Thursday that some crew members were evacuated. "I don't know how many they got off. We did see indications that there were life boats and that some sailors got off the ship," he said. It's not known how many casualties there were.
The Neptune has been in service in the Ukrainian Navy since March 2021, according to the U.S. Army.
Military-today.com, a site that tracks military equipment, describes the Neptune as the Ukrainian version of a Russian Kh-35 anti-ship cruise missile, differing in that it is longer and has more fuel and a larger booster. The site says that it was developed by Luch Design Bureau, a Ukrainian defense contractor. Luch Design Bureau's description of the Neptune says, "It is intended to defeat warships such as cruiser, destroyer frigate, corvette, airborne, tank landing ships and vehicles."
source: https://www.cbsnews.com/news/moskva-ship-sinking-russian-flagship-neptune-missiles/