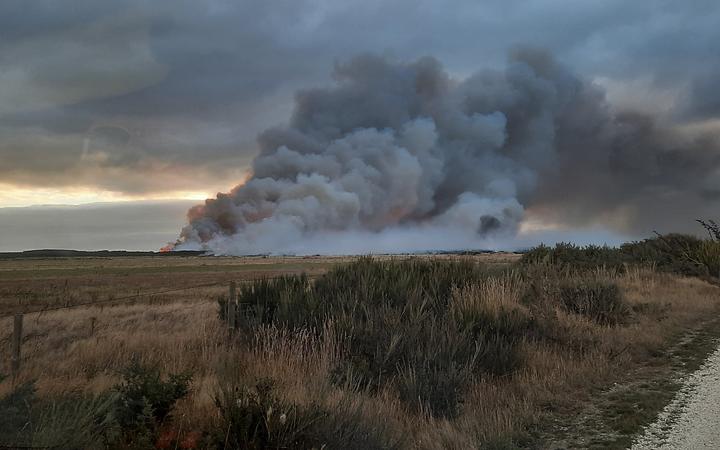 Smoke from a fire burning through 1000 hectares of manuka scrub and peat soils at Awarua, south of Invercargill, on 3 April, 2022. Photo: Fire and Emergency NZ

The fire at Awarua started on Saturday and has spread through more than 1300 hectares with a perimeter of 26 kilometres.

It did not spread overnight and there was 30 millimetres of rain, but the region remained in drought.

Fire and Emergency said around 30 firefighters were back on the ground and were preparing for challenging conditions.

MetService has issued a strong wind watch for coastal Southland until 10pm on Wednesday with southwest winds potentially approaching severe gale in exposed places at time.

Fire and Emergency said helicopters were grounded, but three were on standby in case the conditions improved.

Incident Controller Mark Mawhinney said they would be monitoring the situation closely.

Tīpuna have carried out mahika kai (food gathering) practices in the area for generations with many tīpuna buried around Awarua/Waituna.