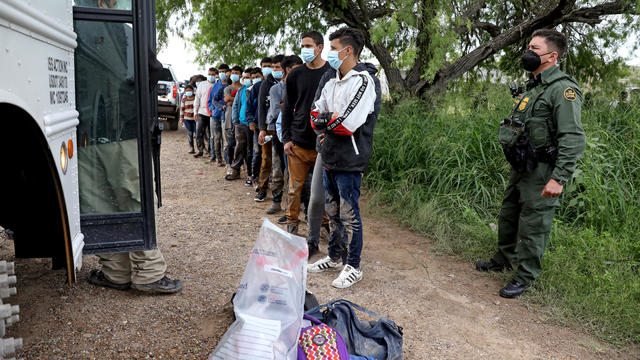 A group of Democratic senators is planning to join Republican lawmakers in introducing a measure on Thursday that would temporarily block the Biden administration's plan to end pandemic-related restrictions that allow border authorities to quickly expel migrants, according to people familiar with the plan.
The proposal, expected to be co-sponsored by six Republican senators and five moderate Democratic senators, would prevent the Centers for Disease Control and Prevention (CDC) from following through with an order published last week that will stop authorizing the border rule, known as Title 42, in late May.
Democratic Sens. Kyrsten Sinema and Mark Kelly of Arizona; Maggie Hassan of New Hampshire; Jon Tester of Montana; and Joe Manchin of West Virginia are co-sponsoring the bill, alongside Republican Sens. James Lankford of Oklahoma; John Thune of South Dakota; John Cornyn of Texas; Thom Tillis of North Carolina; Shelley Moore Capito of West Virginia and Rob Portman of Ohio.
The measure is expected to be proposed as an amendment to the latest COVID-19 relief package that Congress is debating, according to a person familiar with the plan. Axios first reported the details of the bill Wednesday evening.
Since it was enacted in 2020 as a temporary pandemic response measure by the Trump administration, Title 42 has allowed U.S. border officials to summarily expel migrants to Mexico or their native countries, bypassing laws that require the government to interview asylum-seekers to ensure they won't face harm if deported.
For over a year, the Biden administration said the expulsions were needed to contain the spread of COVID-19 inside border processing facilities. But after judicial setbacks and political pressure from liberal Democrats, the CDC announced last week it would stop authorizing the migrant expulsions on May 23.
CDC Director Rochelle Walensky said the expulsions were no longer necessary because of improving pandemic conditions, including the drop in coronavirus cases since the Omicron surge this winter and increased vaccination rates in the U.S. and migrants' native countries.
But the measure set to be introduced Thursday would require the administration to first end the national COVID-19 public health emergency declaration and then notify Congress about a planned termination of Title 42. After such a notification is made, the CDC would have to wait at least 60 before rescinding Title 42.
During that 60-day timeframe, the CDC would be required to consult with the Department of Homeland Security (DHS), which oversees border agents, to submit a plan to Congress about how the government would address a potential spike in migrant arrivals once Title 42 is lifted, according to the bill's text.
If that plan is not submitted within 30 days of the original notification, any effort to end Title 42 would need to be delayed by 30 days after the plan is sent to Congress.
The Democratic support for Thursday's bill illustrates the intra-party dispute among Democrats triggered by the CDC's decision to wind down the Title 42 expulsions, which is already being used by Republican campaigns to attack President Biden and vulnerable Democrats ahead of the November midterm elections.
Two of the bill's co-sponsors, Kelly and Hassan, are up for reelection in swing states. Other Democrats facing reelection fights have criticized the planned Title 42 rescission, including Senators Catherine Cortez Masto of Nevada and Raphael Warnock of Georgia, although they did not co-sponsor Thursday's bill.
Like their Republican colleagues, Democratic critics of the Title 42 announcement have said DHS is not ready to respond to the expected sharp increase in border arrivals that officials are preparing for once the expulsions stop.
DHS officials have said they are mobilizing additional personnel, including Border Patrol agents; securing more buses and aircraft to transport migrant families; and erecting new migrant processing facilities along the southern border in anticipation of the expected increase in migration.
A White House official said Congress should not delay passage of the coronavirus relief package by trying to add "unrelated issues," noting the funding is "needed right now to protect the American people."
"If we do not have treatments, if we do not have the medicine people need, Americans will die from COVID whether they support or oppose the administration on immigration, or child care, or environmental rules," the White House official told CBS News.
In an interview with "CBS News Evening News" anchor and managing editor Norah O' Donnell on Wednesday, Homeland Security Secretary Alejandro Mayorkas said the U.S. could "very well" see a spike in border arrivals, but noted his department is preparing for different contingencies, including by surging resources and expanding transportation capabilities.
"What distinguishes us from the past is the fact that we will not implement policies of cruelty that disregard our asylum laws," Mayorkas said. "We are rebuilding a system that was entirely dismantled."
While some moderates have expressed skepticism about Title 42's end, many Democratic lawmakers, including Senate Majority Leader Chuck Schumer, have been calling for the policy's termination for months, saying the expulsions were part of a Trump administration effort to gut the U.S. asylum system.
On Wednesday, Sen. Bob Menendez, a Democrat from New Jersey who chairs the Senate Foreign Relations Committee, posted a "reminder" on Twitter regarding U.S. border policy.
"Responsible stewardship of our border, and honoring our moral and legal obligations to treat immigrants and refugees with dignity, are not mutually exclusive," he wrote. "We can, and MUST, do both."
Camilo Montoya-Galvez is the immigration reporter at CBS News. Based in Washington, he covers immigration policy and politics.
source: https://www.cbsnews.com/news/immigration-title-42-senate-bill-border-expulsions/