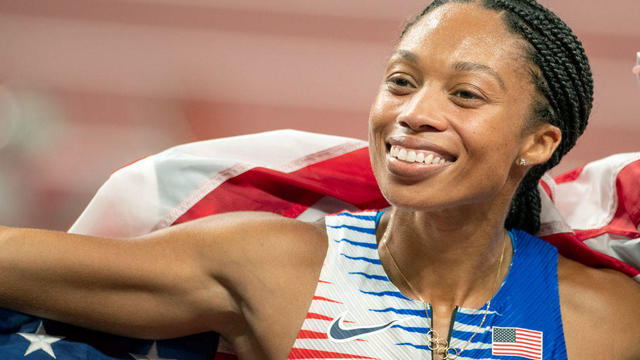 The most decorated track and field athlete in Olympic history is officially hanging up her shoes. Allyson Felix announced Wednesday that she will retire after the 2022 season.
"As a little girl they called chicken legs, never in my wildest dreams would I have imagined I'd have a career like this," Felix captioned her heartfelt Instagram post. "I have so much gratitude for this sport that has changed my life. I have given everything I have to running and for the first time I'm not sure if I have anything left to give. I want to say goodbye and thank you to the sport and people who have helped shape me the only way I know how—with one last run."
"This season isn't about the time on the clock, it's simply about joy," she continued. "If you see me on the track this year I hope to share a moment, a memory and my appreciation with you."
A post shared by Allyson Felix (@allysonfelix)
The 36-year-old has been a house hold sports icon for almost 19 years. The most decorated U.S track athlete of all time, she holds 11 Olympic medals spread out over five Olympic Games and is a 10 time national champion.
During her career, the Los Angeles native made a name for herself off the track as well, continually speaking up for pay equity in sports and equality for women. In 2018, while she was pregnant with her daughter, Felix spoke about renegotiating her Nike endorsement, calling for larger protections for pregnant athletes.
"My disappointment is not just with Nike, but with how the sports apparel industry at large treats female athletes," she said. "Athletes are told to shut up and play. We are told that no one cares about our politics. We are told that we're just entertainers, so run fast, jump high, and throw far. And don't mess up. But pregnancy is not messing up."
In 2018, after revealing that she was diagnoses with pre-eclampsia, Felix had an emergency C-section and gave birth to her daughter Camryn two months early. Since her difficult pregnancy, Camryn's birth and subsequent almost month long stay in the newborn intensive care unit, Felix said that her experiences and Camryn continually motivate her.
In March, she announced the start of the "No" Grants program, which supports women with "short-term financial assistance" if they are punished for saying no or setting boundaries in their workspaces.
"This season I'm running for women," she said on Wednesday. "I'm running for a better future for my daughter. I'm running for you. More to come on that, so stay tuned, but I'll be sharing a series of announcements that I'm hoping will make the world better for women. Here's to my final season."
source: https://www.cbsnews.com/news/allyson-felix-announces-retirement-olympic-track-star/