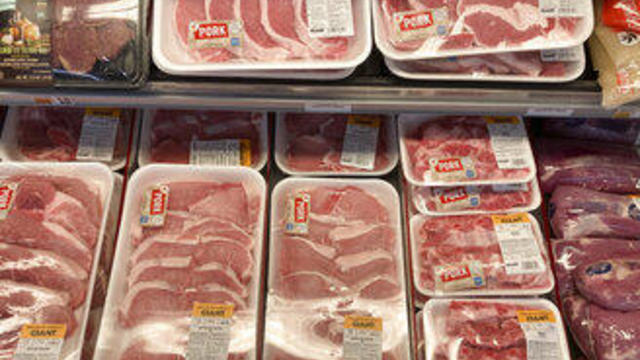 A fight over food-stamps is brewing in Iowa, where Republican lawmakers have proposed a bill that would bar people who receive government nutrition benefits from using them to buy a wide variety of foods, including fresh meat, butter and flour.
The bill, called House File 3, was introduced earlier this month by state House Speaker Pat Grassley. The lawmaker, whose grandfather is Sen. Chuck Grassley, told CBS2Iowa that the bill is needed to trim spending the Supplemental Nutrition Assistance Program, or SNAP, to free up funding for other priorities.
SNAP is fully funded by the U.S. Department of Agriculture, a federal agency, although states bear some administrative costs for running the program for qualifying residents.
The Iowa measure comes as the food-stamp rolls around the U.S. have swelled during the pandemic, with 42 million people receiving food stamps as of October— an increase of about 14% from prior to the health crisis, according to the most recent data available.
In Congress, Republicans have often targeted SNAP for cost-cutting, including a push during the Trump administration to add work requirements for food-stamp recipients.
"If you look at the cost, if you want to look at a true budget impact on what things really are challenging in the budget for public education or private education, whatever it would be, it's these entitlement programs," Grassley told CBS2Iowa. "They're the ones that are growing within the budget and are putting pressure on us being able to fund other priorities."
Iowa last year had a state budget surplus of $2 billion, and the state cut its corporate tax rate from 9.8% to 8.4%, according to the Iowa Gazette. In September, Iowa Gov. Kim Reynolds said "our fiscal health is strong" in touting the state's budget surplus.
Grassley's bill would restrict food-stamp purchases to foods approved by another program called Women, Infants and Children (WIC), which is a supplemental aid program aimed at addressing nutritional deficiencies for pregnant, breastfeeding, or postpartum women and children up to 5 years old.
The program is restrictive because it seeks to ensure access to foods like milk and whole grains, but many who qualify for WIC also are eligible for food stamps, providing them with a broader array of foods.
The bill is scheduled to be discussed in a subcommittee on January 26. Iowa's House and Senate are controlled by Republicans, while its governor is also a member of the GOP.
Anti-hunger advocates in Iowa are pushing back against the SNAP proposal, saying it would increase hunger and hardship among the state's residents.
"SNAP recipients could no longer purchase meat, other than certain varieties of canned tuna and salmon," the Iowa Hunger Coalition said in a statement criticizing the bill. The group said people on food stamps spend about $1 of every $5 on meat, poultry and seafood, making it the top food category purchased by SNAP recipients.
Other foods that would no longer qualify for food-stamp purchases include: butter, flour, white rice, white bread, sliced cheese, cooking oil, herbs, spices, and coffee and tea, among other items, the Iowa Hunger Coalition said.
The bill also would set an asset limit to get food stamps in Iowa at $2,750, meaning that people whose net worth exceeds that threshold wouldn't qualify for SNAP benefits. If one person in the household is disabled or over 60 years old, the cap would rise to $4,250.
That would particularly put two-vehicle households at risk, given that value of two cars could easily jump above $2,750, the Iowa Hunger Coalition said.
"Having a vehicle can be the difference between finding employment or not, especially in rural areas of the state without public transit," the group noted. "This policy would keep Iowans stuck in poverty, not help them out."
source: https://www.cbsnews.com/news/iowa-food-stamp-bill-fresh-meat-butter-flour-snap-benefits/