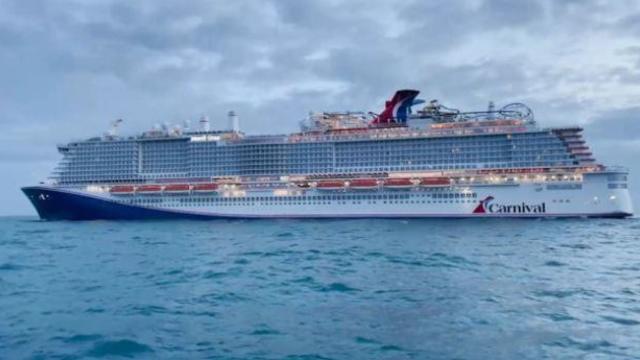 The U.S. Coast Guard was searching for a man who jumped overboard from a cruise ship Saturday as it approached Florida.
The man jumped from the Carnival Cruise Line ship Mardi Gras just after midnight about 55 miles east of Port Canaveral, according to the Coast Guard and Carnival.
The Coast Guard responded with two cutters and an airplane to search for the 43-year-old man. The Mardi Gras and the cruise ship Elation also participated in the search, said Coast Guard spokesman David Micallef.
"The Carnival Care Team is supporting the guest's family. Mardi Gras," said Carnival spokesman Matt Lupoli. "Our thoughts and prayers are with the guest and his family."
Lupoli said the Coast Guard released the ship from the search efforts and it continued to Port Canaveral. It will continue sailing as scheduled.
CBS Miami reported the Mardi Gras is the largest ship ever built for the cruise line. The first cruise ship with an onboard roller coaster, the Mardi Gras is 1,130 feet long, has 21 decks, 2,641 staterooms, and features six themed zones and restaurants from Guy Fieri, Emeril Lagasse, Rudi Sodamin and Shaquille O'Neal.
Last month, a guest jumped overboard from the Carnival Horizon ship that had departed from Miami. That man's body was reportedly found.
source: https://www.cbsnews.com/news/man-jumps-carnival-cruise-ship-florida-coast-guard-search/