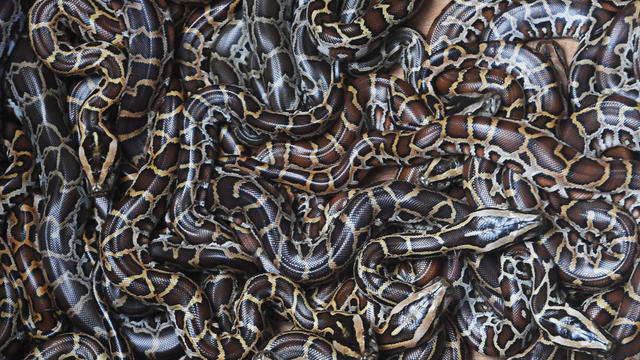 A 49-year-old man found unresponsive in his Maryland home surrounded by snakes died from a poisonous snake bite, CBS Baltimore reports.
In January, a neighbor found the man unconscious in his home and called 911. EMS personnel forced their way into the home and pronounced him dead at the scene, according to CBS Baltimore.
While inside the house, responders found over 100 venomous and non-venomous snakes on racks. The snakes included pythons, rattlesnakes, cobras and black mambas, Jennifer Harris, a spokesperson for Charles County Animal Control, told WRC-TV. The largest snake found in the house was a 14-foot Burmese python, according to officials.
Officials confirmed Wednesday that there was no foul play involved in the man's death.
"The cause of death is snake envenomation and the manner of death is an accident," a spokesperson from the office of the chief medical examiner confirmed to CBS Baltimore.
After first responders found the cache of reptiles, animal control called for assistance from other reptile experts in Virginia and North Carolina to help contain all of the snakes.
Owning poisonous snakes is illegal in Maryland.
source: https://www.cbsnews.com/news/maryland-man-snake-bite-death/