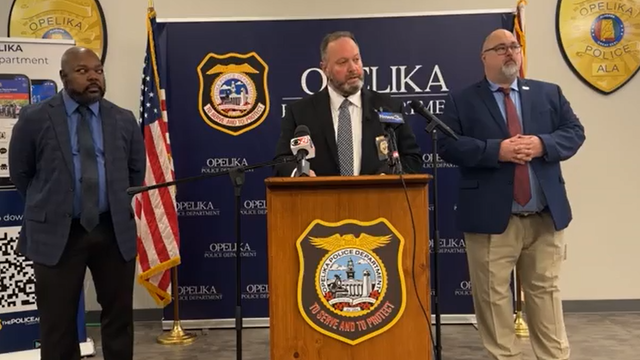 Since 2012, the remains of the small child found behind a mobile home in Alabama were known only as "Baby Jane Doe." On Thursday, police in Opelika announced that they identified the girl as Amore Joveah Wiggins and arrested her father as a suspect in her death.
Police Chief Shane Healey said investigators identified the girl by taking a genetic profile, developed from DNA extracted from the remains, and uploading it to a DNA database to look for relatives.
Police identified the girl's father as Lamar Vickerstaff Jr., 50, and arrested him in Jacksonville, Florida, charging him with felony murder. Vickerstaff and his wife, Ruth Vickerstaff, who is not the girl's mother, were both charged with failure to report a missing child.
It was not immediately known if the Vickerstaffs have an attorney.
10 AM Press Conference regarding the Opelika Baby Jane Doe Case
Healey said the girl's mother, Sherry Wiggins of Virginia, lost track of the child after a Virginia court awarded the Vickerstaffs legal and physical custody in 2009 and "has been looking for her ever since."
"The level of dedication to this case, I have never seen in my entire career — to see a group of men and women coming together searching for a name," the police chief said.
Healey became emotional at times during the news conference, saying "It felt really, really good to say her name out loud."
Amore's skull and bones were found on Jan. 28, 2012, in a trailer park in Opelika, a city of about 30,000 people roughly 55 miles (89 kilometers) northeast of Montgomery.
Authorities believe Amore, who was born on New Year's Day 2006, was between the ages of 4 and 7 when she was killed. An autopsy showed she had sustained 15 fractures to her skull, arms, legs, shoulders and ribs during her life, Healey said. Forensic scientists also believe she had been malnourished, he said.
"Amore suffered a tremendous, horrible death," Capt. Johnathan Clifton said.
Police asked people who knew the family in one of the places they may have lived, including in Alabama, Jacksonville, Florida,. and Norfolk, Virginia, to contact them if they have any information about the family or child. Police said Lamar Vickerstaff grew up in Opelika and is in the process of retiring from the U.S. Navy.
Police said early attempts to develop a DNA profile for Jane Doe were unsuccessful because of the condition of the remains. But in 2022 two companies were able to extract DNA from the scalp and hair, and a genetic profile was compiled and uploaded to a DNA database. A genealogist who works closely with the National Center for Missing & Exploited Children use the genealogical profile to identify possible relatives and develop investigative leads, the police department said.
source: https://www.cbsnews.com/news/baby-jane-doe-amore-joveah-wiggins-identified-father-lamar-vickerstaff-arrested-felony-murder-opelika/