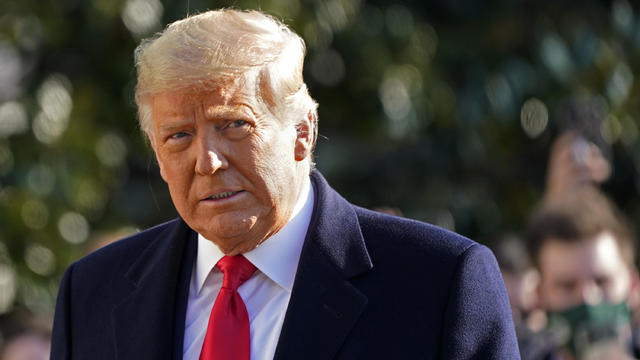 A former prosecutor who's planning to release a book about the criminal investigation into former President Donald Trump he led for nearly a year was warned Monday to expect a lawsuit.
Former Manhattan Special Assistant District Attorney Mark Pomerantz concluded Trump's approach to business was similar to that of former mob boss John Gotti, and deserved to be indicted, according to a press release for the book, "People vs. Donald Trump: An Inside Account." It's a description that doesn't sit well with Trump attorney Joseph Tacopina.
"I strongly admonish you to take these next words seriously: If you publish such a book and continue making defamatory statements against my clients, my office will aggressively pursue all legal remedies," Tacopina wrote in a letter to Pomerantz Monday, alleging defamation.
Pomerantz defended the book in a statement to CBS News.
"If the former president should sue me, I will defend that litigation. I stand by the statements I have made previously and those contained in my forthcoming book," Pomerantz said.
Pomerantz was hired in February 2021 by former Manhattan District Attorney Cyrus Vance Jr. to lead that office's wide-ranging yearslong investigation into Trump's finances. Pomerantz left the post in February 2022, claiming in his resignation letter that newly elected Manhattan District Attorney Alvin Bragg had balked at charging Trump.
Pomerantz wrote in his resignation letter that he believed "Donald Trump is guilty of numerous felony violations" and advised Bragg "that we have evidence sufficient to establish Mr. Trump's guilt."  Bragg, he wrote, "raised issues as to the legal and factual sufficiency of our case and the likelihood that a prosecution would succeed."
Bragg has declined to comment on the resignation letter, but insisted the Trump investigation remains active. He said after the Trump Organization's Jan. 13 sentencing for tax fraud that the investigation was entering its "next chapter."
In recent months, investigators have revisited some of the earliest threads of the investigation, including alleged "hush money" paid in 2016 by former Trump attorney Michael Cohen to adult film star Stormy Daniels.
Cohen himself was interviewed by investigators with the office on Jan. 17.
"They're professional, and they're going to be doing their job," Cohen said after the two-hour meeting.
Bragg's office has also sought to stall Pomerantz's book. His office's general counsel, Leslie Dubeck, wrote in a Jan. 18 letter to Pomerantz, publisher Simon & Schuster and parent company Paramount Global, that Pomerantz "is under an obligation to receive prior written permission from the DA's Office before making any disclosures" related to the investigation.
A spokesperson for Simon & Schuster said the company stands "behind Mark Pomerantz and his book, People vs. Donald Trump, and look forward to sharing this important and timely work with readers when it is published on February 7."
Simon & Schuster, like CBS, is part of Paramount Global.
Both Dubeck and Tacopina raised concerns that Pomerantz's book might include confidential information.
Dubeck wrote that "there is a meaningful risk that the publication will materially prejudice ongoing criminal investigations."
Tacopina cautioned against publishing "information obtained in violation of grand jury secrecy laws."
"Consider yourself sufficiently warned. Very truly yours, Joseph Tacopina," he wrote.
Graham Kates is an investigative reporter covering criminal justice, privacy issues and information security for CBS News Digital. Contact Graham at [email protected] or [email protected]
source: https://www.cbsnews.com/news/trump-attorney-threatens-to-sue-people-vs-donald-trump-author-manhattan-d-a-investigation/