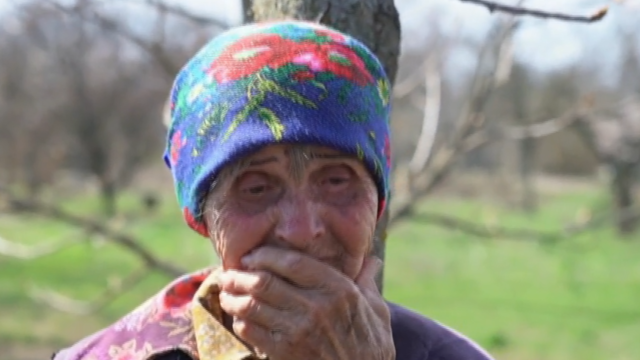 The women of Ukraine are living under a constant threat, with growing evidence of sexual violence emerging as the war carries on.
Vera, an 83-year-old retired school teacher, told CBS News that her village was occupied by Russian forces last month when she was raped. For her safety, CBS News is not using her last name or identifying the village where she lives.
"He grabbed me by the back of the neck," she said. "I started to choke, I couldn't breathe."
"I told the one who raped me, 'I'm old enough to be your mother. Would you let this happen to your mother?'" she continued. "He made me shut up."
Vera said her husband who has disabilities was in the house when she was attacked and she was also beaten.
"When he finished he grabbed a bottle of vodka," she said. "I asked if I could put my clothes back on. He barked, 'No!'"
When the man left her house, he fired his assault rifle in the air three times outside.
The Ukrainian military took CBS News to Vera's village because they'd heard reports of sexual assault by Russian forces. Locals told us others were also raped there, including a 16-year-old girl. CBS News has not been able to independently verify any of the allegations, but Vera's story was detailed, compelling and heartbreaking.
She also reported it to the Ukrainian police, she told us, who took sheets away for testing.
"He should have shot me," Vera said. "I wish he had killed me instead of what he did."
Vera said she believes her attacker was from Ukraine's far east, a region controlled by Russian-backed separatists, where men have reportedly been conscripted to fight for Russia.
"Everything hurts," she said. "I'm in a state where I'm neither dead nor alive. Before I felt joy with the spring, now I don't feel anything. I have nothing."
In the U.S., help is available for survivors of sexual violence and their families. RAINN offers resources at 1-800-656-HOPE and on their website, www.rainn.org
source: https://www.cbsnews.com/news/ukraine-russia-war-soliders-rape/