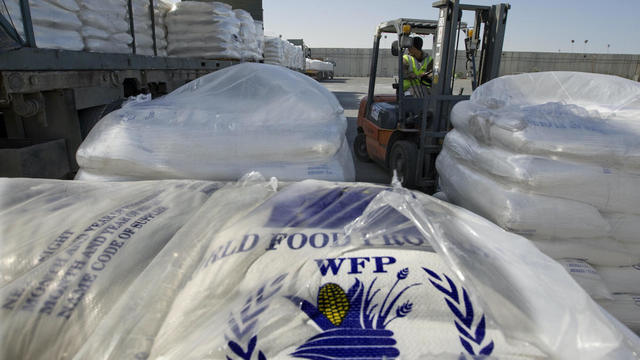 As the war in Ukraine carries on, the people left in the country continue to face food shortages. World Food Programme Executive Director David Beasley was on the ground in Ukraine this week and told "Face the Nation's" Margaret Brennan that he is not confident he can keep food supply lines open.
"There are places that we can't reach, like in Mariupol, in other places where Russian forces have besieged the city and are not allowing us the access we need," Beasley said. "Just like Ukraine is the breadbasket of the world, and now they're in bread lines."
So far, the United Nations' World Food Programme has been able to reach over 1 million people inside Ukraine, providing them with ready-to-eat food, bread and cash assistance.
But Beasley said the war has caused a dramatic increase in the need for food aid around the world, and Ukraine — a significant producer and exporter of agricultural products such as grain, sunflower seeds and corn — could fall behind on its output because of the war. In 2021, the country exported over $27 billion in agricultural products.
"This is a very serious problem if we don't get the farmers back in the fields, not just a few, but all the farmers back into the fields. So they can plant, they can put fertilizer out, they can harvest," Beasley said.
He said it is equally important to reopen ports.
"The Black Sea is shut down right now," Beasley said. "That's the basis and the way by which 400 million people get their food from Ukraine right now. So that's got to be opened up."
The WFP typically feeds around 125 million people on any given day, week or month, according to Beasley. But the new conflict in Ukraine has already caused the organization to cut rations in war-torn regions like Yemen, because they simply do not have enough funding to reach every crisis.
"The last thing we want to do is take food from a hungry child to give it to a starving child," Beasley told "Face the Nation." "Just when we thought it couldn't get any worse, and we were running short of money, which is why we've been cutting rations to children and families of people around the world."
Currently, the WFP is spending over $71 million more a month due to rising food and fuel prices around the world, while also facing a $9 billion funding shortfall.
"We're going to need an extra few billion this year," Beasley said. "But if we don't get it, you're going to have war, conflict, destabilization, which is going to cost a thousand times that."
"When we don't have enough money, well, guess what? We have to choose which children eat which children don't eat," he continued. "What breaks your heart is there's $430 trillion worth of wealth around the world today. There's no reason a single child should be dying from hunger, much less going to bed hungry."
source: https://www.cbsnews.com/news/ukraine-conflict-could-harm-global-food-supply-david-beasley-world-food-programme/