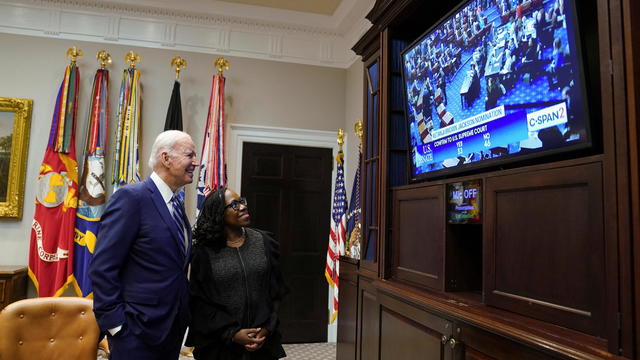 President Biden and Vice President Kamala Harris are celebrating Judge Ketanji Brown Jackson's confirmation to the Supreme Court Friday at the White House. The president, vice president and Jackson will deliver remarks.
Jackson was confirmed 53-47 on Thursday, with three Republicans joining Democrats. She will be not sworn in immediately, since Justice Stephen Breyer is expected to finish out the remainder of the Supreme Court term this summer before he retires.
The White House says Jackson's family, all current and former Supreme Court justices, the president's Cabinet, senators who voted for her and other key leaders in Congress are invited to the South Lawn event.
On Thursday, Harris, the first woman and first woman of color to be vice president, presided over the Senate during the vote to confirm the first Black woman to the court.
Jackson's appointment to the high court as the nation's 116th justice is likely to be a significant component of Mr. Biden's legacy and marked his first opportunity to make his imprint on the high court.
"Judge Jackson's confirmation was a historic moment for our nation," Mr. Biden tweeted after the Senate vote. "We've taken another step toward making our highest court reflect the diversity of America. She will be an incredible Justice, and I was honored to share this moment with her."
source: https://www.cbsnews.com/live-updates/ketanji-brown-jackson-supreme-court-biden-celebration-watch-livestream-today-2022-04-08/