Philadelphia to end mask mandate days after reinstating it 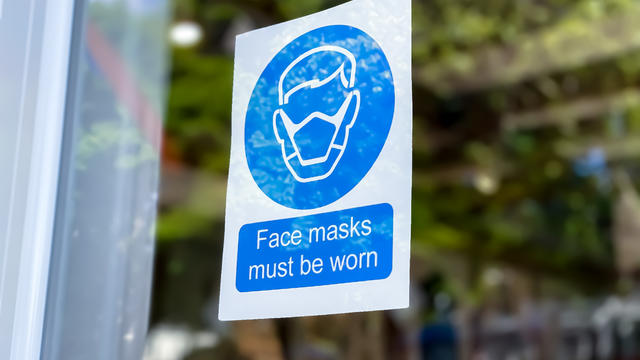 Philadelphia is ending its indoor mask mandate, city health officials said Thursday night, abruptly reversing course just days after people in the city had to start wearing masks again amid a sharp increase in infections.
The Board of Health voted Thursday to rescind the mandate, according to the Philadelphia health department, which released a statement that cited "decreasing hospitalizations and a leveling of case counts."
The mandate went into effect Monday. Philadelphia had ended its earlier indoor mask mandate March 2.
The health department did not release data to back up its reversal on masking, saying more information would be provided Friday. Philadelphia had become the first major U.S. city to reinstate its indoor mask mandate, but faced fierce blowback as well as a legal effort to get the mandate thrown out. Few masks were worn at the Philadelphia 76ers' home playoff game on Monday, even though they were required under city rules.
City officials said the mandate would be lifted Friday morning.
"The City will move to strongly recommending masks in indoor public spaces as opposed to a mask mandate," the health department said in a statement.
When the city announced April 11 that the mandate was coming back, the health commissioner, Dr. Cheryl Bettigole, said it was necessary to forestall a potential new wave driven by an omicron subvariant. She said Philadelphia had crossed the threshold of rising cases at which the city's guidelines call for people to wear masks indoors.
"If we fail to act now, knowing that every previous wave of infections has been followed by a wave of hospitalizations, and then a wave of deaths, it will be too late for many of our residents," Bettigole said at the time.
Cases and hospitalizations continued to rise at least through Monday, when the health department reported 82 patients in the hospital with COVID-19 — up nearly 80% from a week earlier — with confirmed cases up 58% over that same span to 224 per day. Those numbers were still a fraction of what the city endured during the wintertime omicron surge.
The restaurant industry had pushed back against the city's reimposed mask mandate, saying workers would bear the brunt of customer anger over the new rules.
Several businesses and residents filed suit in state court in Pennsylvania seeking to overturn the renewed mandate.
"We were very pleased to see Philadelphia make the correct decision to rescind the mask mandate," said the plaintiffs' lawyer, Thomas W King III, who was among those involved in last year's successful legal challenge to the statewide mask mandate in schools.
Shortly before news broke that the mandate was ending, the issue came up during Thursday night's debate between the three leading Democratic candidates seeking the party's nomination for Pennsylvania's open U.S. Senate seat. Notably, two of them, Lt. Gov. John Fetterman and state Rep. Malcolm Kenyatta of Philadelphia, came out against the mandate.
"We have to move past COVID," said Fetterman, adding that "we have to live with this virus, and I don't believe going backwards with a mask mandate or with closures is appropriate."
U.S. Rep. Conor Lamb of suburban Pittsburgh said he hated wearing masks, but thought Philadelphia officials were "trying to do what's best for everybody."
Most states and cities dropped their masking requirements in February and early March following new guidelines from the U.S. Centers for Disease Control and Prevention that put less focus on case counts and more on hospital capacity and said most Americans could safely take off their masks.
The Justice Department, meanwhile, said it is appealing a judge's order that voided the federal mask mandate on planes and trains and in travel hubs. The CDC asked the Justice Department to appeal the decision handed down by a federal judge in Florida earlier this week.
source: https://www.cbsnews.com/news/mask-mandate-philadelphia-pennsylvania-covid-19/