How the war ends in Ukraine is an "open question," top military officer says 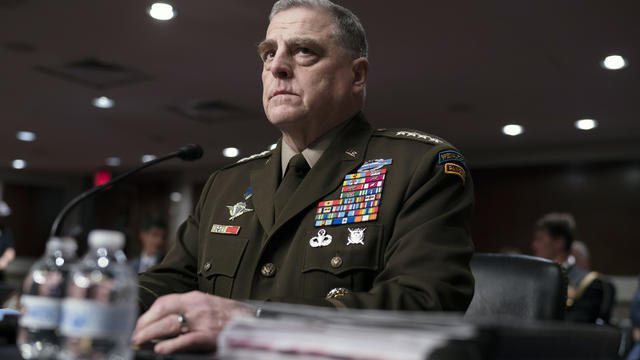 The top U.S. military officer told Congress on Thursday that the way the war ends in Ukraine is an "open question."
Chairman of the Joint Chiefs of Staff Gen. Mark Milley said in testimony in front of the Senate Armed Services Committee on Thursday that the next phase of the war will be a "long slog."
Milley said Ukrainians have managed to defeat the Russian onslaught on Kyiv, "but there's a significant battle yet ahead down in the southeast region, where the Russians intend to mass forces and continue their assault. So I think it's an open question right now how this ends."
Both Milley and Defense Secretary Lloyd Austin said that the U.S. is focused on getting the weapons the Ukrainians need and use effectively to them as quickly as possible.
Austin told the committee that Russian President Vladimir Putin had "given up" on the advance toward Kyiv in large part because of the Ukrainian resistance.
"We have provided them those anti-armor, anti-aircraft weapons and also the UAVs that have been really somewhat decisive for lack of a better term," Austin said. "Putin thought he could rapidly take over the country of Ukraine, very rapidly take over the city of Kyiv. He was wrong."
Milley said the U.S. and its allies have provided 25,000 anti-aircraft weapons systems and 60,000 anti-tank systems to Ukraine. He said the weapons helped Ukrainians defend Kyiv.
Several senators raised the concern that the assistance is not getting to Ukraine quickly enough since they are fighting for their lives. Austin assured them that the weapons start getting into Ukraine on average between four to five  days after an announcement, which he said is unprecedented speed.
This week, Russian forces completely withdrew from around Kyiv and Chernihiv and moved north into Belarus and Russia to be refitted, resupplied, and potentially reinforced with additional manpower before entering Ukraine again, likely in the Donbas region.
There are no indications as of now that the Russian forces are back in Ukraine, but when they do, officials expect a protracted conflict. Milley told the House Armed Services Committee on Tuesday that the conflict will likely be "measured in years."
Pentagon press secretary John Kirby said Wednesday that just because the Pentagon expects this conflict to last potentially years doesn't mean the Ukrainians can't ultimately win the war.
"The proof is literally in the outcomes you're seeing every day, the Ukrainians are fighting bravely for their country and they have denied Mr. Putin so many of his strategic objectives, so absolutely they can win," Kirby said.
CBS News reporter covering the Pentagon.
source: https://www.cbsnews.com/news/ukarine-war-end-open-question-mark-milley/