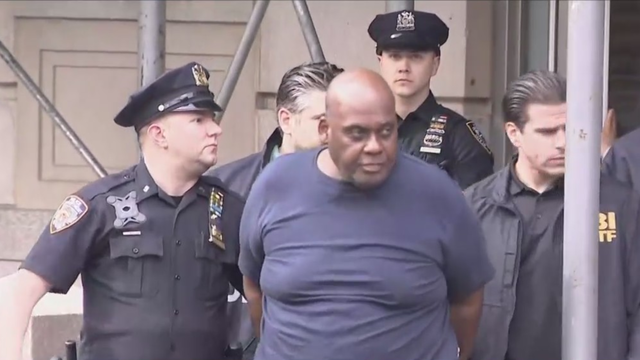 The man suspected in a violent attack on riders of a New York City subway Tuesday, appeared in federal court Thursday and was ordered held without bail, reports CBS New York.
Frank James did not enter a plea Thursday. Prosecutors said the attack was premeditated and constitutes an act of terror. If convicted, James could spend the rest of his life in prison, reports CBS New York.
Ten people were shot and wounded and over a dozen more suffered other injuries in the attack, in which police say the suspect unleashed a gas canister in a crowded train car before opening fire. James is facing a federal terrorism charge and a possible punishment of life in prison, authorities said. Police are still investigating the motive behind the attack that happened during Tuesday morning's rush hour.
James was arrested Wednesday afternoon in Manhattan's East Village neighborhood. Officials said he called a police tip hotline to turn himself in.
At a Tuesday press conference New York City, Police Commissioner Keechant Sewell said the attack began at around 8:24 a.m., when a man who was riding an N train in Brooklyn's Sunset Park neighborhood "donned what appeared to be a gas mask" before taking out a canister and opening it, releasing smoke into subway car. He then started shooting.
In the federal complaint filed Wednesday, officials said James is suspected of using a Glock 17 pistol, which he purchased in Ohio. They included a photo of marks on the gun's serial number, and indicated they believe James may have attempted to "deface" the number.
James was initially linked to the case when investigators found a key to a U-Haul van at the scene of the shooting and determined that the van had been rented by James. The van was found Tuesday afternoon at a different location in Brooklyn.
Officials said a hatchet, fireworks and gasoline were also found in the van. A receipt found on the subway platform led police to a storage facility in Philadelphia, where they found 9mm ammunition, a device that allows a silencer or suppresser to be attached to a pistol, targets and .223 caliber ammunition, which is used with an AR-15 semi-automatic rifle, according to the complaint. A search of his apartment turned up another gun, according to the complaint.
James appears to have posted a series of videos online in recent weeks in which he airs a host of grievances, including some directed at New York City Mayor Eric Adams, and complains about the number of homeless people in New York City. The videos also include commentary on how easy he felt it would be to commit crimes in the subway system, regardless of an increase in police presence.
Graham Kates is an investigative reporter covering criminal justice, privacy issues and information security for CBS News Digital. Contact Graham at [email protected] or [email protected]
source: https://www.cbsnews.com/news/brooklyn-subway-attack-suspect-frank-james-held-without-bail/