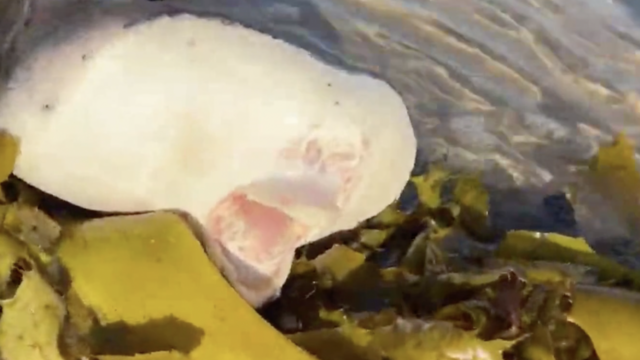 Drew Lambert was jogging on a beach in Sydney on Tuesday when he came across an "alien like creature" with "human" lips. He posted a video on Facebook of the creature washed up on Bondi Beach, asking for people to help him identify it.
Lambert told Storyful, a news and content provider, that the animal appeared to be nearly half a meter long, and it had lips like a human and skin like a shark.
"I've lived in Bondi for 20 years and I've never seen anything like this before" he told Storyful.
Laetitia Hannan, a supervisor at Sea Life Sydney Aquarium, told news.com.au it was a coffin ray, which are also known as Australian numbfish. According to the Atlas of Living Australia, it's a type of electric ray that can be found on the country's east, west and south coasts.
Lambert's discovery comes less than three weeks after another mysterious animal popped up in a different part of Australia.
Alex Tan, a pastor, stumbled upon the corpse of an "alien" creature during a walk in Queensland and posted clips about it on his Instagram page. Since his finding, he's been leading an online crusade to get answers on what animal it is — even trying to recruit Robert Irwin, the son of late Steve Irwin.
"I think this is something everyone is so invested in and we just want answers," he told CBS News. "The people want answers."
Christopher Brito is a social media producer and trending writer for CBS News, focusing on sports and stories that involve issues of race and culture.
source: https://www.cbsnews.com/news/alien-creature-australia-sydney-bondi-beach/