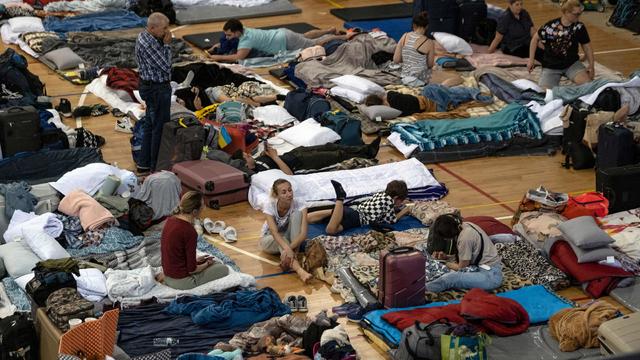 A 17-year-old Ukrainian girl who was detained by U.S. authorities along the Mexican border was transferred over the weekend to a government shelter in New York for unaccompanied and undocumented children, her prospective sponsor told CBS News Monday.
Like thousands of Ukrainians unable to return to their war-torn country, Yelyzaveta sought to enter the U.S. through the southern border last week. But because she was traveling without her parents or legal guardians, Yelyzaveta was processed as an unaccompanied child and held by Customs and Border Protection (CBP) officials in southern California for a few days.
Since March, U.S. border officials have been admitting Ukrainian families and adults through the San Ysidro port of entry near San Diego. But a 2008 anti-trafficking law requires border authorities to transfer undocumented children traveling without their parents to Department of Health and Human Services (HHS) shelters.
Yelyzaveta's initial detention by border officials shocked her travel companion Alina Dolinenko, 21, a fellow missionary trainee from Ukraine who was allowed into the U.S., and Sharon Fletcher, a Maryland resident who had agreed to host the two Ukrainian missionary trainees in her home.
During a brief phone call on Thursday, Fletcher said Yelyzaveta complained about conditions in the CBP facility where she was held and told her that she was scared. Fletcher became worried as she did not hear from Yelyzaveta again until Sunday, when the 17-year-old was able to call again.
"She said that she's in a better place," Fletcher told CBS News, recounting Sunday's conversation. "They're giving her everything that she needs. She was transferred from the border to Chicago and then to New York."
HHS' Office of Refugee Resettlement houses unaccompanied children without legal U.S. status until they turn 18 or the agency can find and approve sponsors, typically family members residing in the U.S., who can care for the minors.
The vast majority of the unaccompanied children in HHS care hail from Central America, but the agency has recently received a small but growing number of Ukrainian minors who entered the country through ports of entry without their parents or legal guardians.
On Monday, the Office of Refugee Resettlement was housing around 20 unaccompanied children from Ukraine, a U.S. official told CBS News, requesting anonymity to discuss internal data. The refugee office was housing 10,000 unaccompanied minors over the weekend, according to agency data.
Fletcher, the head of a nonprofit that sponsored Yelyzaveta's Christian missionary training in Mexico, said she's now in touch with HHS caseworkers to begin the process of sponsoring Yelyzaveta so that she can leave government custody. Yelyzaveta is set to turn 18 in June.
Because she's not related to Yelyzaveta, Fletcher's sponsorship bid may take longer than cases involving sponsors who are family members. But Fletcher said she was recently able to get a letter from Yelyzaveta's parents in Ukraine to speed up the sponsorship process.
"I told her that I've heard from her parents and she said to me, 'You tell me that I have not been able to connect with my parents for all these months, but you were able to connect with them?'" Fletcher said. "I told her everything will be OK."
Fletcher said she's willing to house Yelyzaveta and Dolinenko until they can return to Ukraine.
Faced with limited pathways to immigrate to the U.S. directly, a record number of Ukrainians displaced by Russia's invasion of their homeland have been flying to Mexico seeking to enter the U.S. along the southern border.
Since February 1, nearly 10,000 undocumented Ukrainians have been processed by U.S. border officials, the vast majority at ports of entry, according to internal government data obtained by CBS News.
Since the start of the Russian invasion in late February, 4.5 million people have fled Ukraine in the swiftest refugee crisis since World War II, United Nations figures show.
Camilo Montoya-Galvez is the immigration reporter at CBS News. Based in Washington, he covers immigration policy and politics.
source: https://www.cbsnews.com/news/ukraine-girl-us-border-custody-separation-shelter-new-york/