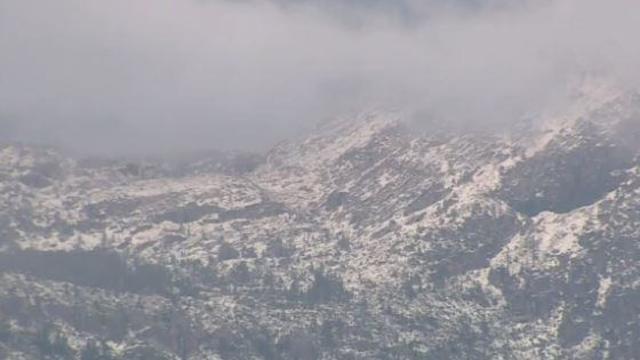 A woman survived being stranded in the snow for six days in a remote area of a northern California forest, CBS Sacramento reports. The 52-year-old said she survived by eating snow and a 6-pack of yogurt, according to the Lassen County Sheriff's Office.
On April 18, at around 2:30 a.m., Lassen County Sheriff's deputies received a report that Sheena Gullett had been stranded in the snow for several days. The report came from 48-year-old Justin Lonich, who told the officers they had been driving on dirt roads off of Highway 44 when their vehicle became stuck in the snow, officials said.
After spending the night in their car, the next morning they realized the car's battery was dead.
When they attempted to walk to Highway 44, Gullett fell behind due to the soles of her shoes falling off and Lonich went ahead to get help. Lonich later went back to find Gullett but was unable to locate her due to the heavy snowfall.
Unable to find the highway, Lonich was forced to spend two nights outdoors. Finally,  Lonich was able to reach Highway 44, where he hitched a ride into Susanville and immediately reported Gullett missing and stranded in the forest, possibly with their vehicle.
Crews began to search for Gullett, but bad weather made it difficult to conduct a thorough search. Finally, on April 20, a sheriff's sergeant located the vehicle with the help of Lonich.
"Immediately upon his arrival, Sheena came out of the vehicle. She was very emotional, but physically okay," the sheriff's office said.
Gullett told them that during the six days she was stranded she had rationed a six-pack of yogurt, eating one per day. Since she had no water, she told them that she ate snow to survive.
She said that at one point, she saw one of the search helicopters flying overhead but they were unable to spot her in the heavily wooded area.
"The Lassen County Sheriff's Office Command Staff commends the efforts of all personnel involved in searching for and locating [Gullett]. Through their efforts, she was found safe and is now back home," wrote the Lassen County Sheriff's Office.
source: https://www.cbsnews.com/news/sheena-gullett-stranded-forest-6-days-survives-eating-snow-yogurt-california/