American history on the auction block 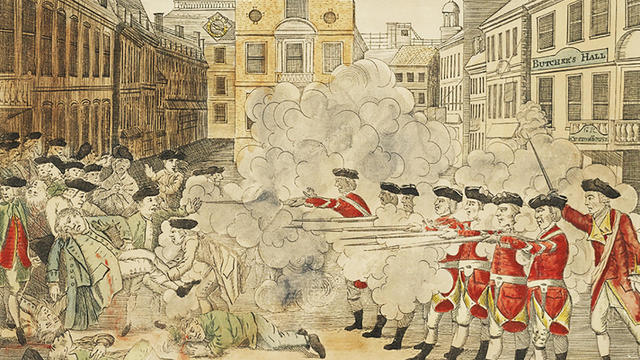 When the founding fathers drafted the Declaration of Independence in 1776, a copy was printed in Salem, Massachusetts. "It was printed to convey the news to a very specific audience," said Christina Geiger, head of the Books & Manuscripts Department at Christie's Auction House in New York. "It wasn't intended to survive."
But this copy did survive – one of six remaining originals from that printing. And now, it could be yours for around a million dollars. Showing the copy to correspondent Serena Altschul, Geiger said, "It always gives me goosebumps."
Geiger is overseeing the auction of the private collection of William Reese, a celebrated bookseller who died in 2018, leaving behind a significant personal collection of printed Americana.
Items up for grabs include Paul Revere's engraving of the 1770 Boston Massacre (pre-auction estimate: $250,000-350,000)…
Also, a first edition copy of "The Travels of Captains Lewis and Clark," published in 1809 ($40,000-60,000); and rare bird engravings by John James Audubon ($1,500-$50,000).
When these items (and about 700 more) are auctioned off starting next month, it will be historic, according to Geiger: "It will be the most significant sale in its category of print Americana and travel since the late 1960s," she said.
Estimated to bring in between $12-18 million, this treasure trove took over 40 years for Reese to amass, all while helping others build their own collections. Nick Aretakis, who leads the Americana Department at the William Reese Company in New Haven, Connecticut, said of Reese, "He was really the most important bookseller of his generation. I don't think that can be challenged."
He said Reese developed a keen eye at a young age. His first major sale was in college, when he found a rare map of Mexico at a rug auction, and sold it to Yale for the remainder of his tuition. "The joke now is that it's one of the rare times that Bill ever undervalued something," said Aretakis.
"Sunday Morning" was given a look at a few pieces currently for sale at William Reese, including
A famed pamphlet by Alexander Hamilton, in which he admits to an affair with Maria Reynolds – a story you may be familiar with after "Hamilton."
"It's gone up in value about 10 times since the musical came out," Aretakis said.
Then there are the journals of a Union solider in the Civil War. "You can't get more immediate than these, and more moving," he said.
For William Reese, it seems 40 years wasn't nearly enough time spent connecting people to books.
Altschul asked, "Why do you think he wanted to auction his personal collection?"
"He thought it was very important that dealers and collectors are only temporary custodians of an item," Aretakis replied, "that you own it only for a short time, that eventually it comes back into the market and a whole new generation of dealers and collectors have the opportunity to buy that."
An opportunity to share a passion for the past.
For more info:
Story produced by Aria Shavelson. Editor: Joseph Frandino.
source: https://www.cbsnews.com/news/auction-americana-william-reese-book-collection-christies/