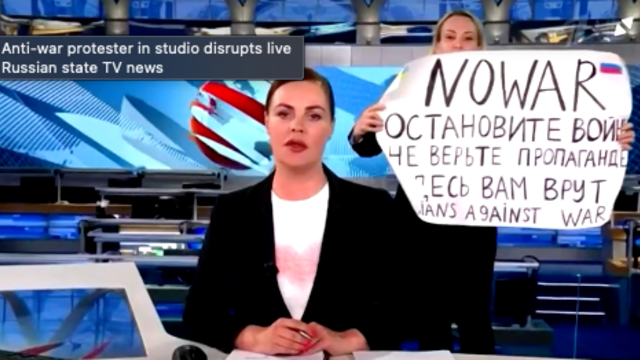 Marina Ovsyannikova, the Russian TV journalist who interrupted a broadcast to protest the war in Ukraine, has a new job in Germany. Ovsyannikova had been detained and released after she went on a primetime broadcast of Russia's Channel One with a sign that read "You are being lied to."
Publisher Axel Springer announced on Monday that the 43-year-old will report for Germany's WELT as a freelance correspondent, writing for the newspaper as well as contributing to its TV news coverage. She will be reporting from Ukraine and Russia, among other areas, the publisher said.
Ovsyannikova said her new employer "stands for what is being so vehemently defended by the courageous people of Ukraine on the ground right now: freedom."
"I see it as my duty as a journalist to defend that freedom," she said. "And I am delighted to be able to do this now for WELT."
Ulf Poschardt, the editor-in-chief of the WELT Group, said Ovsyannikova "had the courage to confront Russian viewers with an unembellished view of reality," in what he described as a "crucial moment."
"She defended the most important journalistic ethics — despite the threat of state repression," he said. "I am excited to be working with her."
Ovsyannikova's now-viral protest occurred in March, when she burst onto the set with a sign that read: "Stop the war. Don't believe propaganda. You are being lied to." She was immediately detained and said she was questioned for 14 hours without any representation present.
Following her release, she told Reuters that Russian President Vladimir Putin's February invasion of the neighboring country was a "trigger" for her, as she grew up in Chechnya. The small republic in southern Russia was besieged by Russian forces in the 1990s and early 2000s in two brutal wars caused thousands of deaths.
"Very vivid images from my childhood came flooding back. I understood. I could feel what these unfortunate people are going through. It's really beyond the pale," Ovsyannikova had said. "It was impossible for me to remain silent anymore. ... And ordinary people like me — ordinary Russian women — need to do something about it. Everyone in Russia."
She has remained outspoken about the situation despite the risk, posting various criticisms of Putin's war on her personal Facebook and Instagram pages. On Sunday, Ovsyannikova posted a tribute to Ukrainian refugees, sharing a bit of her own story and assuring the refugees that "you are not alone."
"My house in Grozny was destroyed during the first Chechen War," she wrote in Russia. "...There were many years of torture, wandering around other people's corners, moneylessness and despair. I have hated war ever since."
She continued, "the world has changed ... beyond recognition" in the weeks since the latest war began.
"The main thing now is love, not hate. Kindness, not aggression. Only this can redeem at least a little the guilt of Russian people," she said. "And to give millions of Ukrainians hope for a better and brighter future of their country."
Li Cohen is a social media producer and trending reporter for CBS News, focusing on social justice issues.
source: https://www.cbsnews.com/news/marina-ovsyannikova-russian-journalist-protested-ukraine-war-hired-german-news-channel/