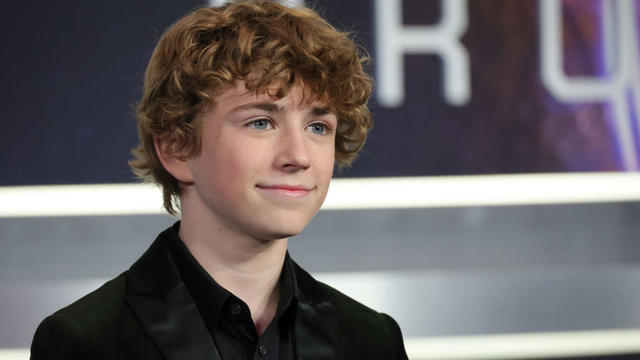 The Disney+ adaptation of the Percy Jackson series has found its hero. Actor Walker Scobell will play the titular role of the young demigod for the upcoming series, according to series author Rick Riordan.
Riordan announced the news Monday, saying Scobell was a "super-fan" of the book series and is incredibly excited for the project.
"Walker Scobell is an incredibly talented young man who blew us away with his audition tapes for the role of Percy," Riordan said in a statement. "It was obvious to me and the rest of the team that Walker had the perfect mix of comedic timing, sweetness, rebelliousness, snark and heroism to embody our hero Percy Jackson.
The series will be based on Riordan's popular novel "Percy Jackson & the Olympians: The Lightning Thief," which tells the story of 12-year-old Percy, who discovers he's the son of Poseidon and a magical camp for demigods, all while going on a quest to save the mortal world from a fight between the gods.
This won't be Percy Jackson's first time moving from the page to the screen. "The Lightning Thief" was made into a film in 2010 starring Logan Lerman, but following movies were scrapped after the premiere of the sequel garnered poor response from fans and critics, as well as a dismal box office showing.
Scobell's most recent project was Netflix's time travel blockbuster "The Adam Project." The young actor starred alongside Ryan Reynolds, Zoe Saldana, Jennifer Garner and Mark Ruffalo.
Chris McCarell, who played Percy Jackson in the series' Broadway adaptation, congratulated Scobell on Monday.
"When I was cast my mom sent me a card that said: "If my life is going to mean anything, I have to live it myself," he said, noting a famed quote from the series. "This is me passing that card on to Walker Scobell. Go off, go in, live it yourself. You are in great hands and we are so.excited.for you."
While fans know little about the upcoming Disney plus series, Riordan has continued to give updates since the series was first green-lit. The author was heavily critical of the film and personally petitioned Disney to allow him to remake the story into a live action television series more true to the original source material.
Riordan also said Monday that Scobell's co-stars, who will play characters Annabeth Chase and Grover Underwood, are close to being announced.
"We look forward to working with the Scobells in Vancouver full-time this summer and building on the dedicated, supportive, enthusiastic community that is rapidly forming around this project," Riordan said. "The excitement is so thick you could cut it with a Celestial bronze sword."
source: https://www.cbsnews.com/news/percy-jackson-walker-scobell-disney-plus-remake/