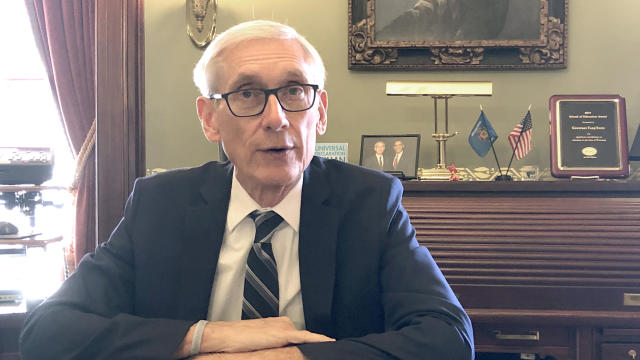 Wisconsin's Democratic Gov. Tony Evers, who is up for reelection in November, on Friday vetoed a package of bills passed by the Republican-controlled Legislature that would have made a series of changes to the battleground state's election laws.
Republicans who fast-tracked the bills don't have the votes to override his vetoes. The bills are part of a nationwide Republican effort to reshape elections following President Joe Biden's victory over Donald Trump.
The bills were quickly passed earlier this year amid Trump's insistence that the 2020 election was stolen from him and that there was widespread fraud, despite no evidence to back up his claims. Courts, recounts, independent audits and partisan reviews have all upheld President Joe Biden's nearly 21,000-vote victory.
In vetoing the eight bills, Evers told lawmakers, "The right to vote is fundamental to our democracy; it should not be subject to the whim of politicians who do not like the outcome of an election."
Evers said the vetoed bills were "passed under the guise of needing to reform our election system because elected officials in this state have enabled disinformation about our elections and elections process."
Republican supporters argued that the changes were intendent to address deficiencies identified in an audit by the nonpartisan Legislative Audit Bureau and a review done by the conservative Wisconsin Institute for Law and Liberty. But the vetoed bills went far beyond those recommendations and would have changed how votes are cast and elections are run in Wisconsin.
Republican Assembly Speaker Robin Vos, who has rebuffed calls from Trump and some Republican lawmakers to decertify Biden's win, had said the bills were about fixing problems for future elections, not relitigating the past.
Vos, who met with Trump, ordered a taxpayer-funded investigation into the election that is ongoing led by former Wisconsin Supreme Court Justice Michael Gableman. The investigation has been mired in lawsuits challenging the legality of subpoenas Gableman filed with mayors of the state's largest and most Democratic cities.
The court fight is expected to go into July and perhaps longer. Gableman's current contract runs through the end of April. Gableman, on a podcast hosted by former Trump chief of staff Steve Bannon, asked fans to call Vos to pressure him to change his mind about picking up Gableman's office equipment on April 26.
Vos floated the possibility of rescinding the subpoenas he signed for Gableman, a move that would effectively end the official investigation.
The bills Evers vetoed would:
source: https://www.cbsnews.com/news/wisconsin-governor-vetoes-republican-election-bills/