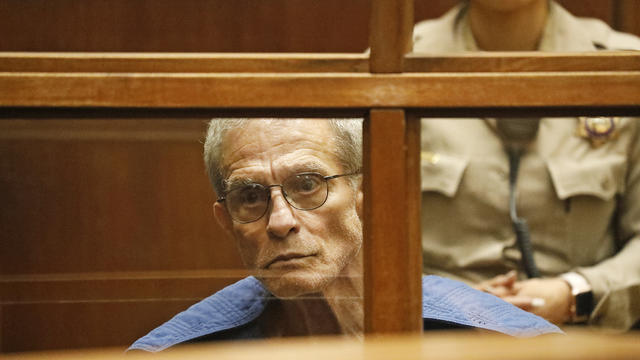 Los Angeles — Even after two men were found dead in his California apartment, Ed Buck did not stop injecting gay men with walloping doses of methamphetamine.
Federal prosecutors said Buck's unrelenting fervor to satisfy a fetish by preying on vulnerable men, often young and Black, is reason enough to keep him behind bars for the rest of his life.
Buck, 67, a big dollar donor to Democratic, LGBTQ and animal rights causes, faces sentencing Thursday in U.S. District Court in Los Angeles for providing fatal doses of drugs, operating a drug den and enticing men to travel for prostitution.
"Buck used his money and privilege to exploit the wealth and power imbalances between himself and his victims, who were unhoused, destitute, and/or struggling with addiction," Assistant U.S. Attorney Chelsea Norell said in a court filing. "He spent thousands of dollars on drugs and party and play sessions that destroyed lives and bred insidious addictions."
Defense lawyers are asking a judge to be more lenient because Buck was sexually abused as a child and developed his drug addiction as the result of a medical condition.
Attorneys Mark Werksman and Elizabeth Little said the judge should go below the 25-year sentence recommended by probation officials that would allow rehabilitation and treatment and "would be much preferable to relegating him to death in prison."
Probation officials also recommended a $1 million fine, though prosecutors said it should be $400,000 to leave money for lawsuits filed by the families of his survivors.
Buck, a wealthy white man who worked as a male model and then made a small fortune selling an Arizona company he rescued from bankruptcy, helped lead a 1987 campaign to recall Republican Arizona Gov. Evan Mecham, who was ultimately convicted in an impeachment trial and kicked out of office.
Buck retired at 32 to the city of West Hollywood, known for its large LGBTQ community, where he lived in a rent-controlled apartment and donated over $500,000 to mostly Democratic causes since 2000.
His troubles began when Gemmel Moore was found dead in his apartment on July 27, 2017. Buck had flown Moore from Texas that morning for drug use and he was dead by sunset.
Moore's mother, LaTisha Nixon, said in a letter to the court that she hoped Buck would get the maximum term for ruining her life and the hurt it has caused her family. Nixon, a certified nursing assistant, said she could not comfort her son the way she has for countless dying people.
"All I can think about is how my son died naked on a mattress with no love around him," Nixon said. "No one to hold his hand or tell him good things."
Community members and activists rallied outside Buck's apartment, calling for his arrest, but he remained free. Family members and Jasmyne Cannick, a political strategist, complained that Buck escaped prosecution because of wealth, political ties and race.
While he was under investigation in Moore's death, Buck continued to pay men so he could inject them. He texted one man, Timothy Dean, to express his annoyance over the investigation.
About 18 months after Moore's death, deputies were called to Buck's apartment on Jan. 7, 2019, to investigate Dean's death.
Even after Dean's death, Buck was not arrested.
"Buck's lack of remorse is aptly captured in one image: As he was hiding out in a hotel, evading arrest for Gemmel Moore's death, he was injecting Dane Brown, another young Black man, with back-to-back slams of methamphetamine," Norell said.
Brown was homeless and later moved into Buck's apartment, where he was injected with meth most days and often several times a day.
He was hospitalized Sept. 4, 2019, after Buck shot him up three times with back-to-back doses. He had five times the meth in his system that Moore and Dean had when they died, prosecutors said.
Brown returned less than a week later and felt himself overdosing after Buck injected him three times with meth. Like other victims who testified against Buck at trial last summer, Brown was nearly immobilized. He said Buck wouldn't help him.
"Brown sat on the couch, resigned to the same fate as Moore and Dean, when he heard his deceased mother cry out to him, 'Get up, Dane,'" Norell said.
Brown managed to get out of the apartment and made it to a nearby gas station, where he called for help and was taken to a hospital. His harrowing account of being revived twice finally led to Buck's arrest.
source: https://www.cbsnews.com/news/prosecutors-seek-life-for-political-donor-ed-bucks-fatal-fetish/