Old gold may create a rush

By Jared Morgan of

Otago is on the cusp of a gold rush not seen since the 19th century as dozens of prospecting and exploration permits are held that follow the original gold-mining trail blazed in the 1860s.

The permits have been issued in the past two to five years, there being a spike in activity from 2020 on with the advent of Covid-19 and record high gold prices meaning eyes have turned to what could be left in Central Otago's historic goldfields.

Indications are the lode in the Central Otago Schist Gold Belt, the country's most highly endowed, yet underexplored gold-bearing region, is not spent yet.

An Adelaide man with 25 years' experience in the gold-mining industry as a global infrastructure IT manager, Stuart Hedges, said looking at the goldfields of the past was becoming increasingly common.

"There has been an increase in permits, especially around older known areas of mining.

"The practices of old were not as efficient as today, so old workings, tailings and waste dumps have the potential to produce more value.

"Couple this with improved mining processes and exploration drilling programmes, companies are able to better target ore bodies, while reducing effort and cost."

A further nine prospecting permits are pending and mainly relate to applications made this year.

Two of those exploration permits and one prospecting permit are held by Australian-based New Age Exploration (NAE), which is the largest player in the Central Otago and Clutha regions having a footprint totalling 558sq km as part of its Central Otago Gold Project (COGP).

NAE managing director Joshua Wellisch said the COGP, which included the Manorburn Project in Central Otago, and Lammerlaw and the Otago Pioneer Quartz projects, which extend into the Clutha district where exploration for Macraes-style orogenic (fault line) gold mineralisation, was already well advanced.

Wellisch said the projects were strategically close to the "world-class" Macraes mine, owned and operated by Oceana Gold in East Otago, and recent discoveries by Santana Minerals at the Bendigo-Ophir Gold Project. 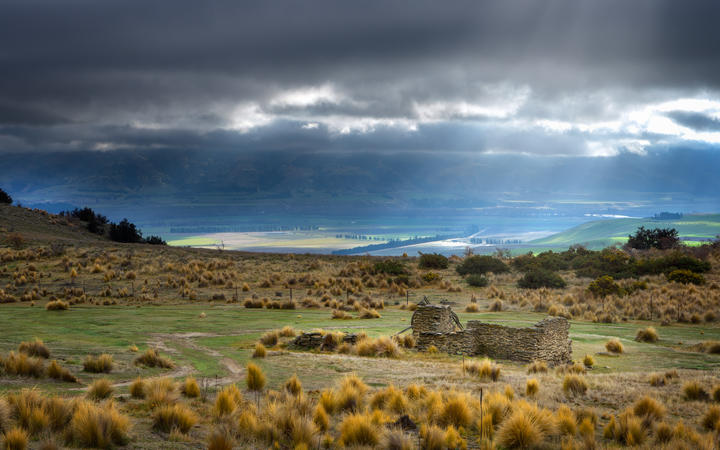 Remains of an old stone structure at the site of the historic Bendigo settlement in Central Otago, where gold was first found in the 1860s. Photo: 123RF

Exploration activity in the region has increased significantly because of the discovery of the Bendigo-Ophir deposits by Santana which had a current mineral resource estimate of 643,000 ounces of gold.

Numerous historical gold occurrences had been reported from within each of NAE's project tenement areas confirming the potential of each, Wellisch said.

A Ministry of Business, Innovation and Employment (MBIE) spokesman said the permits were issued by New Zealand Petroleum and Minerals, which is part of MBIE.

"The spike in new applications was largely down to the gold price hitting a record high and post Covid-19 lockdown activity," he said.

The permits followed a tier system.

"In a nutshell, certain activities are permitted under the certain permits. A prospecting permit is the lowest tier of the three mining-related permits."

The other phases of the permit process were exploration (stage 2) and mining (stage 3).

Prospecting and exploration phases are used to identify the location and size of mineral deposits, the spokesman said.

Minerals permit applications had to meet the requirements of the Crown Minerals Act, but operators also had to comply with the relevant environmental legislation - usually the Resource Management Act - regarding environmental impacts of the proposed activities.

Under the Act, regional councils were responsible for managing the effects of activities on the environment, he said.

"In the event of a minerals mining permit being granted, as above, the relevant environmental legislation would apply to manage the effects of activities on the environment.

"It is possible for a minerals permit to be granted but a resource consent to be declined."

It was important to note granting of a permit did not give an automatic right to access the land - access to the land for exploration and mining activities had to be arranged with the landowner and occupier, the spokesman said.

Gold prices per ounce (the traditional unit used, equal to about 28g) have risen 538 percent in the past 20 years, an ounce of gold being priced at $2806 on Friday.

This article is republished from the Otago Daily Times.

- By Jared Morgan and Shannon Thomson