See how the U.S. is shipping javelins to Ukraine 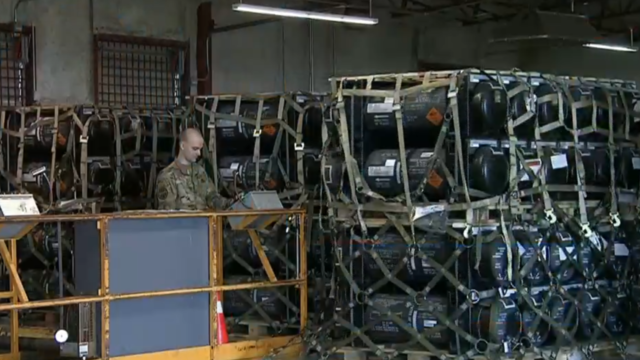 Since the Russian invasion began, the U.S. has committed more than $2.5 billion worth of weapons and other military equipment to Ukraine. In a phone call Wednesday with Ukrainian President Volodymyr Zelenskyy, President Biden pledged an additional $800 million in weapons, ammunition and security assistance.
CBS News was given an exclusive look at a shipment of U.S. military weapons bound for the battlefield.
The weapons arrive at Dover Air Force Base in Delaware in unmarked trucks driven from ammunition dumps located all over the United States. Hundreds of javelin anti-tank missiles — weapons that are destroying Russian tanks — are then loaded aboard a cargo aircraft bound for the battlefield in Ukraine.
"Our goal is to be agile and to move the requirements quickly so the folks on the other end do not have to wait for the material," Colonel Bary Flack, the commander of the maintenance group at Dover Air Force Base, told CBS News. "The hazards are it's a high explosive. These are javelin missiles."
The plane took off Wednesday afternoon and should be arriving overnight in Poland, where the weapons will be handed over to the Ukrainian military.
Ukraine may not be a member of NATO, but Ukrainian officers are working directly with NATO to get weapons into the hands of their soldiers.
"They are in contact with senior leaders in Ukraine, which includes the chief of defense and ministers of defense, and are prioritizing their requirements based on usage rates and what they see on the ground," Rear Admiral Duke Heinz, the director of logistics at U.S. European Command, told CBS News.
The Ukrainians may be outfighting the Russians, but they still need more firepower to counter the buildup of Russian forces in the east and to somehow stop the merciless bombardment of cities.
"We are in it to win," Heinz said. "It's the top priority."
David Martin is CBS News' National Security Correspondent.
source: https://www.cbsnews.com/news/ukraine-javelins-russia/