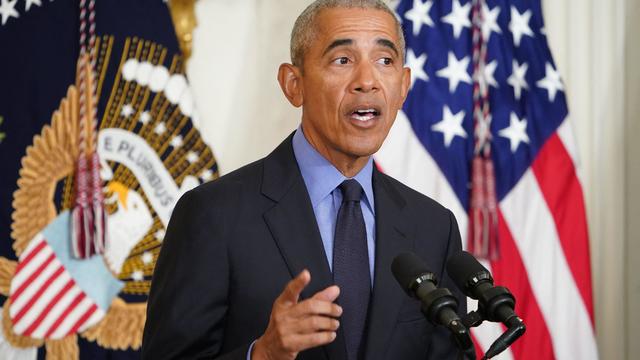 Former President Barack Obama said the way voters consume and share information is weakening democracies around the world and blamed the current information ecosystem empowered by social media companies for "turbocharging some of humanity's worst impulses."
"One of the biggest reasons for democracies weakening is the profound change that's taken place in how we communicate and consume information," Obama said.
Speaking at Stanford University on Thursday, Obama said the current information ecosystem is deepening existing racial and religious divides, though he added that not all the problems of modernity are a byproduct of advancing technology.
"Some of the current challenges we face are inherent to a fully connected world," Obama said. "They're also the result of very specific choices made by the companies that have come to dominate the internet generally, and social media platforms in particular."
Obama said decisions by social media companies around content moderation and the use of algorithms to rank posts "have made democracies more vulnerable."
The former president said he understands that social media companies need to make money but added that it's a concern that "inflammatory and polarizing content attracts and engages."
Leaked internal documents from Facebook's parent company Meta last year showed the platform's researchers were aware their algorithms pushed users to posts containing misinformation.
Facebook researchers have long known that bad actors game the system and manipulate the platform's algorithms. According to a December 2019 memo, Facebook researchers noticed that users were "positing ever more outrageous things to get comments and reactions that our algorithms interpret as signs we should let things go viral."
The former president said that for many Americans it is impossible to tell the difference between a peer-reviewed article from Dr. Anthony Fauci and a miracle cure being pitched by a "huckster."
Obama said the coronavirus pandemic is a good example of how "the very design of these platforms seems to be tilting us in the wrong direction."
"Despite the fact that we have now essentially clinically tested the vaccine on billions of people worldwide, around one in five Americans is still willing to put themselves at risk and put their families at risk rather than get vaccinated. People are dying because of misinformation," Obama said.
He  has highlighted the threat of misinformation and disinformation in recent public appearances, but on Thursday, he took issue with what he characterized as the comprehensive way in which disinformation is impacting democracies abroad and in the U.S.
He said without some standards and guardrails provided by regulators, the consequences for society are "frightening." While Obama challenged social media companies to be a part of the solution, he noted that societal divisions around race, culture, and religion were not created by companies like Facebook and Twitter.
There may be "design flaws" and "bugs" in the software, but he added he's "convinced that it is possible to preserve the transformative power and promise of the open internet while at least mitigating the worst of its harms."
Obama was the subject of a disinformation campaign himself during his presidency when right-wing white nationalists claimed he was not born in America. The White House eventually released a copy of his birth certificate to quiet the false rumors.
In recent months, Obama has been meeting with academics, researchers, former regulators and industry leaders to discuss the threat of disinformation. He has blamed social media platforms for elevating falsehoods as much as truths.
At a conference earlier this month organized by the University of Chicago and The Atlantic, Obama said society needs to find a balance between social media platforms making money and engaging in practices that cause harm.
He repeated that message again Thursday. Obama said that while he believes social media companies are genuine about limiting the dangers of their product, they still have a financial incentive to keep users engaged.
"These companies are still way too guarded about how exactly their standards operate, or how their engagement ranking systems influence what goes viral and what doesn't," Obama said.
He said decisions that impact billions of users shouldn't be left solely to the large social media platforms and require regulatory oversight. Social media companies have been able to avoid scrutiny at least in part because of Section 230 of the Communications Decency Act.
This is the law that ensures that social media companies are not held liable for posts published on their platforms by users and third parties. Lawmakers in Washington D.C. haven't been able to find a way to reform the law despite the introduction of several bills by bipartisan lawmakers last year.
Obama said he's not convinced that Section 230 should be repealed entirely but called for reforms to the law that account for the technological advances and changes brought on by social media platforms.
CBS News reporter covering the intersection between politics and tech.
source: https://www.cbsnews.com/news/obama-blames-social-media-humanitys-worst-impulses/